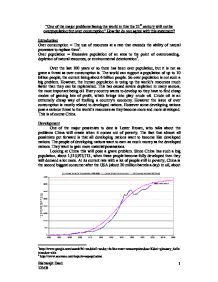 &quot;One of the major problems facing the world in this the 21st century will not be overpopulation but over consumption&quot; How far do you agree with this statement?

"One of the major problems facing the world in this the 21st century will not be overpopulation but over consumption" How far do you agree with this statement? Introduction Over consumption = The use of resources at a rate that exceeds the ability of natural processes to replace them1. Over population = Excessive population of an area to the point of overcrowding, depletion of natural resources, or environmental deterioration2. Over the last 100 years or so there has been over population, but it is not as grave a threat as over consumption is. The world can support a population of up to 10 billion people, the current being about 6 billion people. So over population is not such a big problem. However, the human population is using up the world's resources much faster than they can be replenished. This has caused severe depletion in many sectors, the most important being oil. Every country wants to develop so they have to find cheap modes of gaining lots of profit, which brings into play crude oil. Crude oil is an extremely cheap way of fuelling a country's economy. However the issue of over consumption is mostly related to developed nations. ...read more.

The energy consumption is the highest in developed nations as they have the consumer goods to sell and the people have money to buy them so energy waste. Nowadays banks give out credits so people buy lots of credit cards and use them to buy off the things they like, but don't actually need. It is all to do with advertisement. A salesperson will say buy one and get one at a lower price and the customer will say that it is a good bargain and will buy it. However they needed only one and not two. This way the earth's resources are depleted at a very fast rate because people do not stop to think about what they need and how much they need. They are living beyond their means. The best example as mentioned earlier is crude oil. Below is a graph that shows the rise in plastic production in the US (most developed country in the world). As can be seen from graph that the plastic production really shot up, around the 1970s. From the table it can be seen that there was a significant jump in plastic production. ...read more.

No matter the amount, it will never satisfy them. Conclusion All that can be said is that in order to save the earth's environment, the people on earth and the earth itself the consumption rate has to decrease by a lot or alternative sources of energy need to come in to play. The alternative energy sources will replace the energy but not the production of plastic. For this to happen, information should be spread around about over consumption. This can be done through political elections or enacting new laws. Though enacting new laws will be a problem since many citizens will go against it. The best option is to teach the new generation about these problems from an early start so that they are not influenced by these attractive electronics and go ahead and start consuming at fast rates. People are only in trouble because of credit cards. They spend their entire life time paying off debts because they wanted to have all the latest gadgets and more possessions. So a permanent solution would be teach the students right through school about these problems, it is happening but more of it should take place, or else the future generation will blame us and the human population will not last much longer. ...read more.