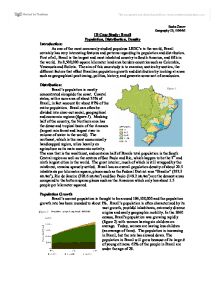 Sasha Zouev Geography IB, 5/09/05 IB Case Study: Brazil Population, Distribution, Density Introduction: As one of the most commonly studied populous LEDC's in the world, Brazil certainly has very interesting features and patterns regarding its population and distribution. First of all, Brazil is the largest and most inhabited country in South America, and fifth in the world. Its 8,500,000 square kilometer land area borders countries such as Colombia, Venezuela and Bolivia. The aim of this case study is to examine, section by section, the different factors that affect Brazilian population growth and distribution by looking at areas such as geographical positioning, politics, history, and generate some sort of conclusion. Distribution: Brazil's population is mostly concentrated alongside the coast. Coastal states, with a sum area of about 35% of Brazil, in fact account for about 87% of the entire population. Brazil can often be divided into clear-cut social, geographical and economic regions (figure 1). Masking half of the country, the Northern area has the dense and tropical basin of the Amazon (largest rain forest and largest river in volume of water in the world). The northeast, which is the most economically handicapped region, relies heavily on agriculture as its main economic activity. ...read more.

Population Problem: Brazil's main problem is that although it has enough land to support all of its population, most of the population ends up crammed in rural villages and big cities near the coast. Too much of the western part of Brazil is disfavored and an inhabitable place for many. Job opportunities are diminutive, throwing many average citizens into poverty. 20% of Rio's population lives in the city's 600 favelas. In the past, favelas (figure 4) have made up images of dirty, dangerous places with a miserable quality of life, but today, many favela communities are working in partnership with the Rio city authorities to counteract these negative images and to combat poverty. Although a favela resident pays taxes like any other citizen in Rio, many have felt mistreated by the city authorities and their wealthier neighbors. With young people making up a high percentage living in the country (figure 5), much of the youth is struggling to fend itself in the harsh and competitive major cities. Many children are forced to work on the street, and for some it is simply their home, day and night. Working hours are incredibly high for these children, and it becomes even harder when they are too poor to catch public transportation and are forced to walk to their jobs or sometimes only return on weekends. ...read more.

Brasilia's location should over time promote the development of Brazil's hinterland and improve the integration of the entire territory of Brazil. Others claim that the real reason was to move the government to a place far from the masses Future Growth?: As of the moment, Brazil is financialy and economically the most powerful country in South America. With a total G.D.P of $1.553 trillion (ranked 10th in the world) and a vast amount of natural resources and large labor pool, Brazil seems to be heading on the right path. Charities and organizations attempt to better the lives of the poor and the working children in Brazil, whilst government policies should better the distribution and the population control across the nation. With improved healthcare and medical care, the elderly are bound to experience a larger life expectancy and live longer. Also with sexual awareness programs and government funded teachings of pregnancy prevention, the birth rate should in turn drop over the coming years. Several predictions have even been established over Brazil's possible population pyramid in 20 years or so (figure 7). Brazil will most likely continue to prosper and continue to attempt to disperse its population and control it. Sources: http://www.brazilhouston.org/ingles/brglance.htm http://learnlink.aed.org/Publications/Country_Papers/cp_brazil/brazil2.htm http://www.geckos.com.au/latin_america/country_notes.asp?country=54 http://www.cia.gov/cia/publications/factbook/geos/br.html http://www.fmpsd.ab.ca/schools/df/Brazil/mpeople.htm http://en.wikipedia.org/wiki/Brazil http://www.ipsnews.net/africa/interna.asp?idnews=25559 http://www.globaleye.org.uk/secondary_summer2002/eyeon/ ...read more.

An excellent case study of population and the factors that affect it in Brazil. Use of data and figures is excellent and they are referred to well in the text.
5 stars.