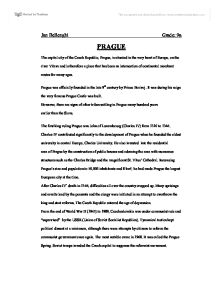 Prague. The capital city of the Czech Republic, Prague, is situated in the very heart of Europe, on the river Vltava and is therefore a place that has been an intersection of continental merchant routes for many ages.

Jan Bellenghi Grade: 9a PRAGUE The capital city of the Czech Republic, Prague, is situated in the very heart of Europe, on the river Vltava and is therefore a place that has been an intersection of continental merchant routes for many ages. Prague was officially founded in the late 9th century by Prince Borivoj. It was during his reign the very famous Prague Castle was built. However, there are signs of other tribes settling in Prague many hundred years earlier than the Slavs. The first king ruling Prague was John of Luxembourg (Charles IV) from 1310 to 1346. Charles IV contributed significantly to the development of Prague when he founded the oldest university in central Europe, Charles University. He also invested into the residential area of Prague by the construction of public houses and adorning the area with numerous structures such as the Charles Bridge and the magnificent St. Vitus' Cathedral. Increasing Prague's size and population to 50,000 inhabitants and 8 km�, he had made Prague the largest European city at the time. After Charles IV� death in 1346, difficulties all over the country cropped up. Many uprisings and revolts lead by the peasants and the clergy were initiated in an attempt to overthrow the king and start reforms. The Czech Republic entered the age of depression. From the end of World War II (1945) ...read more.

The Bohemian Forest also offered a distinct source of lumber which could be used as building material, for production services and as a heating option. These supplies made this city a place which could easily be expanded and improved. At present, Prague's functions have changed. The main function of Prague is in the tourism sector. There are more than 1.5 million tourists visiting the "City of a hundred Spires" each year. The city was not bombed during the war and many old buildings are still in their original style and make. In addition the very narrow streets in the old center offer a wide range of cultural and culinary delights. The expression of being a true "Bohemian" applies to the artistic and cultural affluence one is faced with at every corner of this city. But apart from theatre, music and art the more tangible products made of metal like machinery including aircraft engines, cars, diesel engines, tools, and electronics are also vital for the city�s development. Prague also produces vast amounts of beer, chemicals and processed foods. I think that Prague fits best to Burgess's Model because this model is fitted for old existing cities all around the world which originated many hundred years ago. The comparison clearly shows that Prague is almost identical to the model created by Burgess. ...read more.

[SOURCE 1] The architecture in Prague is extremely remarkable since the houses suffered only little damage from the bombing in WWII. To get around the city, the Dopravn� podnik hl. m. Prahy (The Capital City of Prague Transport Company) has built a public transport infrastructure. There is a metro, trams and buses which lead you all across the city. The public transport also leads to the outer suburbs of Prague making life easier for commuters. Overall I find Prague a very lovely city despite the air pollution. The marvellous architecture which defers on every building is just stunning and gives you the impression that there must have been a myriad of architects designing this city. Due to the public transport being stable and well kept, the elderly do not have to walk long distances but instead they can take trams, buses or the metro to arrive safely at their destination. The living standard is very high and life expectancy ranges up to 73 years for men and 76 for women. I recommend this city to everybody for it offers opportunities and attraction for people of all nations, cultures and traditions. One can enjoy all genres of the artistic scale as well as beautiful sightseeing, nature and - last but not least - the excellent cuisine. INTERNET: http://en.wikipedia.org/wiki/Prague#Culture http://www.bbc.co.uk/schools/gcsebitesize/geography/images/burgess_model.gif http://www.pragueexperience.com/bars_pubs/czech_beer.asp http://www.guidingprague.com/prague_overview/history/ http://www.myczechrepublic.com/prague/history/prague_history.html http://www.pragueexperience.com/information/history.asp http://www.pis.cz/en/other_info/czech_republic/population_and_religion BOOKS: Pistolesi, Andrea. Art and History of PRAGUE. Milan, Bonechi (c)1996 OTHER: Google Earth 2006 (c), NASA. City: Prague Tschechisches Zentrum. Herrengasse 17. 1010 Wien, �sterreich ?? ?? ?? ?? ...read more.