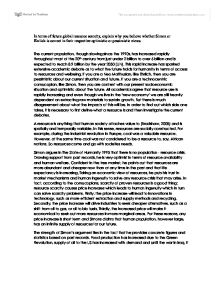 In terms of future global resource scarcity, explain why you believe whether Simon or Ehrlich is correct in their respective optimistic or pessimistic views. The current population, though slowing since the 1990s, has increased rapidly throughout most of the 20th century from just under 2 billion to over 6 billion and is expected to reach 8.9 billion by the year 2050 (UN). This rapid increase has sparked extensive academic debate as to what the future holds for humanity in terms of access to resources and welbeing. If you are a Neo Malthusian, like Ehrlich, then you are pessimistic about our current situation and future. If you are a technocentric cornucopian, like Simon, then you are content with our present socioeconomic situation and optimistic about the future. All academics agree that resource use is rapidly increasing and even though we live in the 'new economy' we are still heavily dependent on extracting raw materials to sustain growth. But there is much disagreement about what the impacts of this will be. In order to find out which side one takes, it is necessary to first define what a resource is and then investigate the current debates. A resource is anything that human society attaches value to (Bradshaw, 2005) ...read more.

Some natural resources are unpriced in the market, such as rivers and clean air. Therefore it is cheaper for industries to pollute rather than process their waste. For example, CO2 emissions have increased so rapidly that by 1960 emissions exceeded the Earth's capacity to absorb them and by 1980 they had reached double capacity. By 2020 emissions are predicted to be 3 times environmental capacity (Jones, 2005). This will have detrimental impacts on climate, ecosystems and consequently on human welfare. Also, the so called Green Revolution increased agricultural output, but had negative impacts on both the environment and the socioeconomic situation of poor farmers. Pesticides and other chemical inputs "polluted water ways, poisoned workers and killed beneficial insects" (IFPRI) Furthermore, by taking a purely economic definition of resources he fails to recognise some important issues. Firstly, exploration in more marginal areas will be wasteful in terms of energy spent. For example, more energy is needed to extract perhaps lower quality resources and energy is lost at every stage. Taking this thermodynamic approach to supply, we see that Simon's idea of infinite resources is not realistic. Secondly, capitalist markets exclude the poor, so Simons claim that infinite resources are available to sustain population is only valid for MEDCs. ...read more.

Indeed the prices of most minerals were cheaper in 1990 than any time before and the world produces enough food to feed itself. Ehrlich measures the current socioeconomic situation against some ideal situation, unlike Simon who compares it to the past. Like Simon, Ehrlich fails to address the geopolitical forces that lie behind resource supply. The positive checks i.e. war, famine and disease, that the Neo Malthusians cite as their evidence are not simply a result of resource scarcity. So Ehrlich's argument is not as logical as it first appears. To sum up, it is clear that Simons argument fails to take into account the environmental impacts and thermodynamic aspects of resource supply and the fact that current market prices do not take account of unpriced goods which means that current prices are underpriced. These issues have the potential to threaten future supplies. Ehrlich's ideas, though logical, are too simplistic and don't take account of the market forces. If we are to put our trust in the 'doomsayers' and are later proven wrong, then we will have lost perhaps time and money, but may gain a less populated less exploitive world. If we put our trust in the technocentric cornucopians, and are later proven wrong, we will have lost a lot more. For this reason, and looking at the current causes and effects of climate change, it is safer to side with the 'doomsayers'. ...read more.