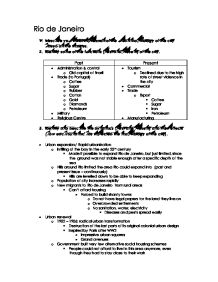 Rio de Janeiro 1. Describe your initial impression of the urban morphology of the city based on the images. 2. Identify some of the functions (past and present) of the city. Past Present * Administration & control o Old capital of Brazil * Trade (to Portugal) o Coffee o Sugar o Rubber o Cotton o Gold o Diamonds o Petroleum * Military * Religious Centre * Tourism o Declined due to the high rate of street violence in the city * Commercial * Trade o Export * Coffee * Sugar * Iron * Petroleum * Manufacturing 3. Identify and describe the dynamics (past and present) and their effects (how each dynamic has impacted the morphology of the city). * Urban expansion/ Rapid urbanization o Infilling of the bay in the early 20th century * Made it possible to expand Rio de Janeiro, but just limited, since the ground was not stable enough after a specific depth of the sea o Hills around Rio limited the area Rio could expand into (past and present issue - continuously) * Hills are levelled down to be able to keep expanding o Population of city increases rapidly o New migrants to Rio de Janeiro from rural areas * Can't afford housing * Forced to build shanty towns o Do not have legal ...read more.

Doxiadis and Associates 1. New plan for the city focused on urban infrastructure a. New high-speed traffic circulation network for the city iv. Walking around or spending time outside became unpleasant for pedestrians since most streets, sidewalks and places were used by cars 1. Social life had dramatically changed a. People chose enclosed and private places to socialise i. Increased the gap between rich and poor 1. Street violence increased v. b. When lost its status as the capital of Brail to Brasilia Lucio Costa developed a plan to show that Rio also had achieved absolute modernity i. Lucio Costas master plan - Redesign of a whole district in Rio to provide a perfect urban environment for modern living 1. Breakdown of the traditional urban patterns a. Urban nuclei with residential towers connected by narrow streets and small squares surrounded by shops, huge green areas without any precise proposed activities separated the nuclei, minimum distance between the two nuclei was 1 km - massive freeway system was designed to link them i. Goal: provide a comfortable and socially integrated urban space 1. Outcome tragic - boundary walls surround the urban areas and 'public' spaces a. Most segregated urban space in the city c. Early CBD i. Caused demolition of old, lower income housing to make way for skyscrapers 1. ...read more.

Alternative public spaces all over the city i. Running, biking, socialising d. Rio Coast Line Project (Projeto Rio Orla) - 1992/1993 1. Reinforce the importance of Rio's beaches a. Redesign of sidewalks, new standardised kiosks, bicycle paths 2. Lighting system a. Make it less dangerous to go out in the night i. Made evening activities popular 3. 6. Evaluate the success of each strategy. a. 1960s to late 1970s i. Plans were made without an accurate sense of social, economic or political feasibility 1. Little practical use a. Failure b. Agache Plan i. Plan had neither time nor financial resources to complete the plan 1. For the first time in Rios urban planning history the city council seemed to admit that it was losing control over Rio's urban growth ii. c. Augusto Ivan - 1979 i. Restored parts of Rios social life form the past ii. Simple and possible plan 1. Reason why it worked well iii. Instead of closing streets, more parks and playgrounds could have been built for little kids 1. Plain streets aren't as attractive as parks/playgrounds d. Rio Coast Line Project (Projeto Rio Orla) - 1992/1993 i. Beach promenades 1. Socialisation of the city 2. Tourist attraction ii. Lightning system 1. Less dangerous to walk/spend time outside a. Tourist attraction b. People spend more time outside i. More shops/restaurants bars open 1. Also good for tourism ?? ?? ?? ?? ...read more.