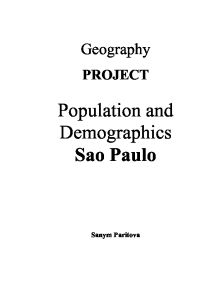 Fortunately, the pace of growth slowed during the 1980s and the forecast of 19 million inhabitants by 1990 was well wide of the mark. A halving of the annual growth rate of some 250,000 people per annum meant that the city had only 15.2 million inhabitants in 1991. Annual growth in the 1980s had averaged 1.9 per cent compared to 4.5 per cent in the 1970s. One reason for this slowing in growth is the dramatic fall in fertility in the country. In the early 1950s, the average woman bore 6.2 children in her lifetime, in the early 1980s only 3.5. Brazil's population growth rate fell from 3.7 per cent per annum in the 1970s to 1.9 per cent during the 1980s. A further reason for the marked slowing in S�o Paulo's population increase is the changing pattern of migration. Even if the authorities are helped by the slower rate of demographic growth, the city's population will continue to grow. It will take an enormous effort to address the needs of these additional people as well as those of the people who were neglected during the lost decade of the 1980s. Such an effort will be helped if the economy begins to grow once again, but, even if it does, one major policy change is vital: more tax resources must be shifted from the State of S�o Paulo and from the nation to the municipal authorities. Without larger fiscal transfers the prospects for the city look bleak. ...read more.