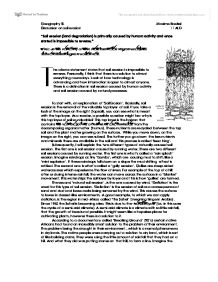 "Soil erosion (land degradation) is primarily caused by human activity and once started is impossible to reverse." Discuss the validity of this statement drawing on examples from different region worldwide. T he above statement states that soil erosion is impossible to reverse. Personally, I think that there is a solution to almost everything nowadays. Look at how technology is advancing and how information is open to almost anyone. There is a distinction in soil erosion caused by human activity and soil erosion caused by natural processes. To start with, an explanation of 'Soil Erosion'. Basically, soil erosion is the removal of the valuable top layer of soil. If you take a look at the image on the right (topsoil), you can see what is meant with the top layer. As a reader, a possible question might be: why is this top layer of soil so valuable? This top layer is the horizon that contains the vast majority of nutrients and minerals from the decomposing organic matter (humus). These nutrients are recycled between the top soil and the plant matter growing on the surface. ...read more.

certain native Africans had found an incredibly smart solution to the problem of their environment. The problem being the drought in their environment, which is a normal phenomena in dry lands. The native people were carrying out a solution to dry land, which is sort of like building dams. They were using the little amount of rainfall that they had on a hill. And what they did was putting stones on that hill, to form a line. Imagine the picture below with stones on each line. What happened when it rained, was that it firstly came through the first layer of stones. Then the rainfall would come down to the next layer of stones etcetera. In this way they managed to fertilize their ground. It actually seems similar to 'contour ploughing', which is a farmers' term for planting around the contour (in this case, putting the stones around the contour of the hill). In China there is another form of soil erosion. Namely desertification. Desertification is defined as land degradation in humid and semi-arid areas, meaning non-desert (arid) areas. Desertification leads to a reduction in vegetation cover and accelerated soil erosion by wind and water. ...read more.

This would reduce soil damage. - Over cultivation can be solved by using fertilizers. This can double yields of grain crops and can reduce the need to open up new land for farming. Another possible solution is introducing new or improved crops. Improving farming methods could also be a solution. Crop rotation (growing different types of vegetables/grains) can increase and reduce pressure on land. It can be concluded that there is a serious issue of desertification in China. Which is the result of a combination of natural and human factors. China's economic growth is starting to take its toll, as it is stressing the environment. In the end, it is up to communistic China itself to use the effective solutions and to consider the implications of its growing international trade. Solutions, which are necessary to restore the natural unbalance. The above statement claiming "Soil erosion (land degradation) is primarily caused by human activity and once started is impossible to reverse." is not valid, as there are clear solutions in order to reverse the effects caused by human activity and nature. The problem is that nowadays it is necessary to take a lot of factors (actually all the factors) into consideration. ?? ?? ?? ?? Geography SL Maxime Boekel Discussion on soil erosion 11 ALD ...read more.