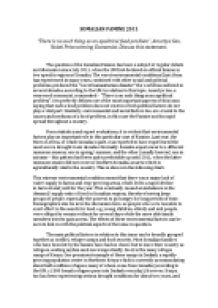 Somalian Famine. There is no such thing as an apolitical food problem, Amartya Sen, Nobel Prize winning Economist. Discuss this statement.

﻿SOMALIAN FAMINE 2011 ?There is no such thing as an apolitical food problem?, Amartya Sen, Nobel Prize winning Economist. Discuss this statement. The question of the Somalian Famine has been a subject of regular debate and discussion since July 2011, when the UN first declared an official famine in two specific regions of Somalia. The worst environmental conditions East Africa has experienced in many years, combined with other social and political problems, produced the ?worst humanitarian disaster? the world has suffered in several decades, according to the UN. In relation to this topic, Amartya Sen, a renowned economist, commented ? ?There is no such thing as an apolitical problem?. Sen perfectly defines one of the most important aspects of this issue, saying that such a food problem does not exist in which political factors do not play a vital part. Similarly, environmental and social factors too, are crucial to the causes and mediums of a food problem, in this case the Famine and its rapid spread throughout a country. From statistics and expert evaluations, it is evident that environmental factors play an important role in this particular case of Famine. ...read more.

However, Kenya, too has been experiencing serious drought conditions for about two years, and this has led to exhausted, barren fields and the death of livestock, which in turn has decreased supply of food for refugees. This does not, in any way, alleviate food security concerns, which are an even larger problem back in Somalia. The journey to these refugee camps is exhausting, and many die or are assaulted along the way; resources in camps, e.g. food distribution, water, shelter, healthcare, etc. are severely overstretched. However, these camps provide their inhabitants with a sense of security that they did not have in Somalia, where an unstable government and political system led to consistent unrest ? ?Now at least we have someone to look after us?, said Alisha, a refugee at Dadaab camp. In Somalia, insecurity, human rights violations, and restrictions imosed on aid agencies (by insurgents) serve to worsen the dire situation of the population. In order to combat the negative impact of the famine in 2012, the UNCHR have made decisions to: scale up its famine emergency program; improve distribution of core relief items and emergency shelter; strengthen measures to prevent under-reporting of gender-based violence; and construct more border police posts to tackle human trafficking. ...read more.

However, despite their potential, women are often the most disadvantaged and undervalued in society, being denied productive economic livelihoods. Governments are therefore now expected to nationally mandate primary and secondary education, especially female education, provide incentives to parents to keep girls in school (through scholarships, reduction/ elimination of fees), etc. In conclusion, we can say that this extreme humanitarian disaster, occurring in the poorest regions of the world has been developed over time by several factors, the most important ones being environmental, social and political. Each of these factors clearly portrays different problematic aspects of this national disaster, and what impact these aspects are having on the deprived populations of poor countries, e.g. Somalia. Although the definitions of the factors differ slightly from country to country, in taking the example of Somalia, we see that most of the issues are quite general and probably common to most poor countries, e.g. drought, and the question of women?s rights. Therefore, in pointing out the causal and contributing factors of the famine in Somalia, one can define the problems and issues in the ?big picture?, i.e. all poor countries that are currently in the first few stages of development. ...read more.