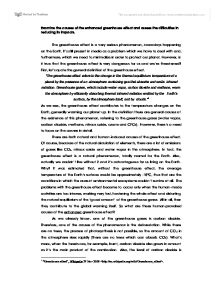 The causes of the enhanced greenhouse effect and assessment of the difficulties in reducing its impacts.

As we already know, one of the greenhouse gases is carbon dioxide. Therefore, one of the causes of the phenomenon is the deforestation. While there are no trees, the process of photosynthesis is not possible, so the amount of CO2 in the atmosphere rises rapidly (there are no trees which can absorb CO2). What's more, when the forests are, for example, burnt, carbon dioxide also grows in amount as it's the main product of the combustion. Also, the level of carbon dioxide is increased thanks to the car engines in which the gasoline is burnt and as well as by burning of other fossil fuels (coal used as e.g. energy source, still very popular in many countries like Poland; oil etc.). Moreover, human-made electrical devices such as air-conditioners, refrigerators and also everyday life's objects, e.g. aerosols cans and these from the plastic manufacturing, are the source of CFCs (chlorofluorocarbons) that contribute to the ozone depletion and, consequently, the greenhouse effect. As far as the ozone depletion goes, the increased levels of UV-B radiation reduce the amount of plankton in the Earth's waters and thus less CO2 is absorbed as well. ...read more.

However, in fact, they're cheaper while taking into account further costs of using after some time (they only require a lot of money at the beginning: for construction, workers, materials etc.). Of course, the technology is still developing so maybe this fact will improve the situation of renewable energy sources. Furthermore, the forests may be expanded as well and deforestation should be limited and this is not a hard thing to be done. The easiest way to reduce the greenhouse gases' amount is taking responsibility for the everyday situations in our life. Thus, we should turn off the light while it's not used; use public transport or bicycles as frequently as possible; change all conventional light bulbs into efficient ones; use energy-efficient devices and buy the ones with hi-tech specifications; also take part in various propagandas and be open to the modern ways of cultivation and the successive replacement of fossil fuels. In my opinion, these alternatives and ways of reducing of the greenhouse effect are not so difficult and complex. These are only the authorities and ourselves who can do something reasonable about the whole issue. 1 "Greenhouse effect", Wikipedia 29 Nov 2008 <http://en.wikipedia.org/wiki/Greenhouse_effect>. ?? ?? ?? ?? ...read more.