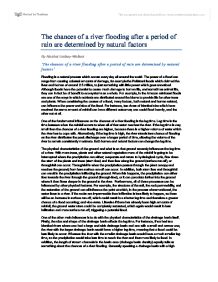 The chances of a river flooding after a period of rain are determined by natural factors: do you agree?

If the rocks are impermeable then infiltration is less likely to happen, so there will be an increase in surface run-off, which could result in a shorter lag time and therefore a greater chance of a flood occurring; and vice-versa. Likewise if there has already been high amounts of rainfall, the ground water store could be completely saturated, which again would result in less infiltration and more surface run-off, triggering a potential flood. One of the other main influences is to do with the physical characteristics of the drainage basin itself. Firstly, the size and shape of the drainage basin effects the lag time. For instance, if we had two identical rivers where one had a large and wide drainage basin and one with a small and narrow one, the river with the larger drainage basin would have a higher lag time, meaning that a flood could be less likely to occur. Whereas the river with the smaller drainage basin would have a much smaller lag time, so the precipitation would take less time to reach the river and thus more likely to flood. ...read more.

This particular problem is a major issue in some places in Holland and Germany along the river Rhine as many vegetated areas are being cleared for agricultural fields causing the ground to become saturated a lot faster. This results in more water reaching the river faster by surface run-off causing the peak discharge to happen much quicker than it should and increasing the chances of a flood; because of this the River Rhine is flooding in some areas. However, with some urbanisation comes an improvement in drainage systems. So more water is being drained out of built up areas and put to rivers where flooding isn't too likely. These systems are designed to minimalize the chances of a flood in built up areas. So, as we can see both human interference and natural factors can influence the chances that a river has of flooding. Therefore, the statement 'the chances of a river flooding after a period of rain are determined by natural factors' is true to an extent, but only tells us half the story. We as humans have a responsibility to prevent needless damage to the environment, with just small changes and management schemes we can prevent such occurrences causing unnecessary damage to the environment and ultimately, mankind. ...read more.