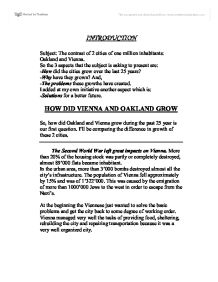 The contrast of 2 cities of one million inhabitants: Oakland and Vienna

INTRODUCTION Subject: The contrast of 2 cities of one million inhabitants: Oakland and Vienna. So the 3 aspects that the subject is asking to present are: -How did the cities grow over the last 25 years? -Why have they grown? And, -The problems these growths have created. I added at my own initiative another aspect which is: -Solutions for a better future. HOW DID VIENNA AND OAKLAND GROW So, how did Oakland and Vienna grow during the past 25 year is our first question. I'll be comparing the difference in growth of these 2 cities. The Second World War left great impacts on Vienna. More than 20% of the housing stock was partly or completely destroyed, almost 89'000 flats became inhabitant. In the urban area, more than 3'000 bombs destroyed almost all the city's infrastructure. The population of Vienna fell approximately by 15% and was of 1'322'000. This was caused by the emigration of more than 1000'000 Jews to the west in order to escape from the Nazi's. At the beginning the Viennese just wanted to solve the basic problems and get the city back to some degree of working order. Vienna managed very well the tasks of providing food, sheltering, rebuilding the city and repairing transportation because it was a very well organized city. ...read more.

Coming back to Oakland, during World War 2 Oakland boomed and was an essential city because of its port. The port voluntarily turned over to the Armed Forces. The Oakland army Based, the Navel supply Base and the shipbuilding industries were developed. But in 1950, when the war had finished Oakland experienced a great decline due to many changes. There are 3 main reasons why the city declined: -First, a lot of the companies that moved in Oakland during the war were military industries. Companies such as GE and GM (general electric and general motors) moved in as part of the booming military industries. When the war finished all these companies moved out. -Secondly, the population decreased because of the changes in local economy migration to suburban communities. There was no more jobs in the city so foreigners were not interested in coming in anymore. Basically Oakland became very poor. -Thirdly, the black race was discriminated at that time and they were the first to be affected by the decline and because of this riots accrued. Laws were passed for equality. - In the mid 70's the racial problems was solved so the political and economical situation stabilized and there was a calmer climate. ...read more.

- Tensions between suburban growth, increased housing density and planned new settlements is one of the strong debates of urban designers. - There are also unending debates about the benefits of land uses, versus the benefits of distinguishing geographic zones where different uses predominate. Basically what has to be planned is "homes" and "sense of place". Local identity, respect for nature, artistic and historic heritage should be preserved 2) Planning safety: - Some planning methods might help an elite control ordinary citizens in order to concentrate criminals and poorer classes away from the elegant town. - Now planners are trying to maximize the accessibility of areas to people with different abilities like handicap, to anticipate criminal behavior. 3) Planning transportation: - Good quality transport is often followed by development. - Good planning attempts to place higher densities of jobs or residents near higher volume transportation. - Providing buses and train can reduce a bit the jams of automobiles. - There have been ideas of creating a personal rapid transit system, that way people wouldn't use their automobiles as often. CONCLUSION We can conclude that Vienna was a very well organized city and it still continues to be so. Oakland on the other hand was a badly organized city but now, it is getting planned and has future plannings in order to catch up with other cities. ...read more.