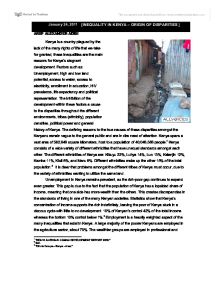 Kenya is a country plagued by the lack of the many rights of life that we take for granted, these inequalities are the main reasons for Kenya's stagnant development. Factors such as: Unemployment, high and low land potential, access to water, access to electricity, enrollment in education, HIV prevalence, life expectancy and political representation. The inhibition of the development within these factors a cause to the disparities throughout the different environments, tribes (ethnicity), population densities, political power and general history of Kenya. The defining reasons to the true causes of these disparities amongst the Kenyans remain vague to the general public and are in dire need of attention. Kenya spans a vast area of 582,646 square kilometers, host to a population of 40,046,566 people.1 Kenya consists of a wide variety of different ethnicities that have unequal standards amongst each other. The different ethnicities of Kenya are: Kikuyu 22%, Luhya 14%, Luo 13%, Kalenjin 12%, Kamba 11%, Kisii 6%, and Meru 6%. Different ethnicities make up the other 15% of the total population.2 It is clear that problems amongst the different tribes of Kenya must occur, due to the variety of ethnicities wanting to utilize the same land. ...read more.

perform structured violent attacks on opposing communities, a culture which does not bode well with the support of peace and security.13 Kenya's government is a presidential representative democratic republic, where the president is the head of state and government, and head of a full multi-party system.14 In the autumn of 1997 the government corrected some oppressive laws passed down from the colonial era; the former colonial laws had been used to have power over freedom of speech and assembly. However there are still issues with power sharing, stability and the guarantee of rights and freedoms for all Kenyans. Corruption in the Kenyan government exists at a high level, where a government official has one of the highest levels of income. The Current president of Kenya Mwai Kibaki, promised to focus his time on generating economic growth, combating corruption, improving education, and the rewriting of the constitution.15With the help of NGOs the media and other aid groups, the path to political freedom has been paved; it is not without obstacles. Kenya is a country where only 57% of all the Kenyans have access to an improved water source, leaving 43%; 16,770,000 people with no means for obtaining a steady supply of water.16 The Competition of land and water has in the past been the root cause of conflicts between Kenyans. ...read more.

In all urban areas, there is a considerable amount more air pollution and has a great impact on the health of the urban inhabitants. Air pollution can cause respiratory diseases such as: chronic obstructive pulmonary diseases, lung cancer, pulmonary heart disease, and bronchitis, all of which pose a significant threat to life expectancy in Kenya. Central province has the highest life expectancy at birth at 64.2 years, placing them at 0.637 on the Human Development Index. Kenya has a lot of room to improve, construct, and exploit its land for the peoples greater good and not for foreign businesses. Kenya has many dimensions of inequality, in land ownership, access and use of land tenure, land size and potential, unbalanced incomes, poverty, disease and low life expectancy. Poverty in Kenya encapsulates much more than just income, but it includes basic needs i.e. human rights. Income and life expectancy are directly linked; along with security of tenure poverty will decrease as well. All the aspects of Kenya's inequalities; economic, social and or cultural must be put under evaluation. To improve upon these problems land is crucial to the attainment of economic growth and thus providing opportunity to correct the remaining issues. Kenya needs to develop an economic plan that has no other concerns in mind but the Kenyans in need. ...read more.