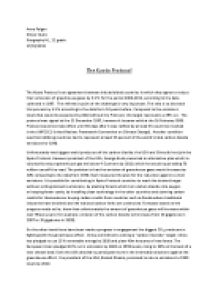 ﻿Anna Palgan Olivier Gubis Geography HL, 11 grade 27/02/2012 The Kyoto Protocol The Kyoto Protocol is an agreement between industrialised countries in which they agree to reduce their emissions of greenhouse gases by 5.2 % for the period 2008-2012, according to the data collected in 1997. The reference point of the challenge is very important. The idea is to decrease this process by 5.2 % according to the data form 10 years before. Compared to the emissions levels that would be expected by 2010 without the Protocol, this target represents a 29% cut. The protocol was signed at the 11 December 1997, however it became valid at the 16 February 2005. ...read more.

However president of the USA, Goerge Bush presented an alternative plan which to voluntarily reduce greenhouse gas emissions 4.5 percent by 2010, which he would equal taking 70 million cars off the road. The problem is that the emission of greenhouse gases would increase by 30% comparing to the data from 1990- Bush measured the plan for the reduction against current emissions. It is possible for contributing in Kyoto Protocol countries to reach the desired target without cutting domestic emissions, by planting forests which turn carbon dioxide into oxygen or keeping fewer cattle, by installing clean technology in the other countries and claiming carbon credits for themselves or buying carbon credits from countries such as Russia where traditional industries have declined and the national carbon limits are underused. ...read more.

China committed to setting a ?carbon intensity? target. China has pledged to use 15 % renewable energy by 2020 and plant 40m hectares of new forest. The European Union pledged 20 % cut in emissions by 2020 on 1990 levels, rising to 30% on the back of a new climate deal. Even the USA decided to participate more in the international actions against the greenhouse effect: the president of the USA, Barack Obama, promised to return emissions to 1990 levels by 2020. Sources: 1. Nagle, Garrett and Briony Coke, Geography course companion, IB DIPLOMA PROGRAMME, ed. Oxford: Oxford University Press, 2011 2. Greenhouse Gas Inventory Data , United Nations Framework Convention on Climate Change, Web. 27 Feb. 2012, http://unfccc.int/ghg_data/items/3800.php 3. West, Larry, What is the Kyoto Protocol, Kyoro Protocol, About.com, http://environment.about.com/od/kyotoprotocol/i/kyotoprotocol.htm ...read more.