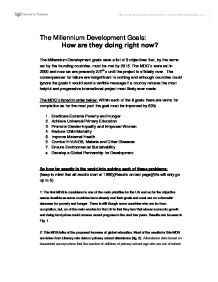 The Millenium Devolpment Goals and their current progress

The Millennium Development Goals: How are they doing right now? The Millennium Development goals were a list of 8 objectives that, by the terms set by the founding countries, must be met by 2015. The MDG`s were set in 2000 and now we are presently 2/3rd`s until the project is officially over. The consequences for failure are insignificant to nothing and although countries could ignore the goals it would send a terrible message if a country refuses the most helpful and progressive international project most likely ever made. The MDG`s listed in order below: Within each of the 8 goals there are terms for completion as for the most part the goal must be improved by 50%. 1. Eradicate Extreme Poverty and Hunger 2. Achieve Universal Primary Education 3. Promote Gender Equality and Empower Women 4. Reduce Child Mortality 5. Improve Maternal Health 6. Combat HIV/AIDS, Malaria and Other Diseases 7. Ensure Environmental Sustainability 8. Develop a Global Partnership for Development So how far exactly is the world into solving each of these problems: (keep in mind that all results start at 1990)(Results on last page)(We will only go up to 6) ...read more.

So far the results are skewed by a reasonably large amount of countries that have made little to no progress to meet the 2015 goal. There are some success stories such as Thailand who has reduced its child mortality rate by half, another top performer is Egypt who went from C.M. 90 to C.M. 23. 5: This MDG reflects many on improving maternal health as this is a huge problem in, once again, Sub Saharan Africa and South Asia. Countries are on there their way to completing this goal but, the two former regions are advancing at a very slow rate (see fig 5). 6: MDG 6 is all about the sickness spreading through the world for example; pneumonia, malaria, HIV/AIDS, and diarrhoea (those four alone are the cause of more 40% of the child mortalities). These sicknesses have wreaked havoc and spread causes across numerous regions and must be stopped. Now that we have are merely 5 years away from the UN`s set deadline for the Millennium Development Goals the rush is on and in at least 2or 3 years I personally beleave that the spotlight will be set on this project and then that`s when the results will go soaring. ...read more.

The graph shows that the literacy rate is increasing fast but, that sadly in some regions the amount of literate women is much less than that of men. The only bright side to this though is that the increase in literate women is rising faster than that of men. Notable exception is Latin America and Caribbean, the only region where there are more literate women than men. So far we see the countries in the world that need the most work, most of which are in Sub Saharan Africa and South Asia. The fact that there are four modern day countries that still have a higher than 200 mortality rates is just disappointing and appalling. This graph shows the amount of maternal deaths per 100,000 live births by region. If a country crosses the 2015 target (orange line) it has completed this goal and as you can see there is not one region on this list that has passed the line. SS Africa is on the list again as furthest away to completion but, this timed joined with the CIS countries. While there is a decline it is not nearly declining enough to reach the set target at that rate. ...read more.