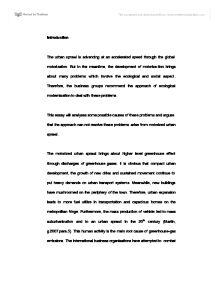 The motorized urban sprawl brings about higher level greenhouse effect through discharges of greenhouse gases. It is obvious that compact urban development, the growth of new cities and sustained movement continue to put heavy demands on urban transport s

Introduction The urban sprawl is advancing at an accelerated speed through the global motorization. But in the meantime, the development of motorization brings about many problems which involve the ecological and social aspect. Therefore, the business groups recommend the approach of ecological modernisation to deal with these problems. This essay will analyses some possible causes of these problems and argues that the approach can not resolve these problems arise from motorized urban sprawl. The motorized urban sprawl brings about higher level greenhouse effect through discharges of greenhouse gases. It is obvious that compact urban development, the growth of new cities and sustained movement continue to put heavy demands on urban transport systems. Meanwhile, new buildings have mushroomed on the periphery of the town. Therefore, urban expansion leads to more fuel utilize in transportation and capacious homes on the metropolitan fringe. ...read more.

For example, the hydrogen would be a potential replacement for energy, but there is no discernible progress in the development of hydrogen. Motorized urban sprawl is a threat to public space through increased consumption in motorization's privatized. Motorization plays a major role in encroaching public space. For instance, the scarcity of pedestrian traffic in motorized urban sprawl suggests a private social life enclosed within vehicles and homes (Martin, g.2007.para.10). The ascendency of the private vehicle results in serious transport injustice in some social groups (Bullard and Johnson 1997, citied in Martin, g.2007.para.10). Meanwhile, the staggering advancement of motorization is attended by The urban infrastructure stretched,because urban put a strain on the public space . A principal instance of the social impacts of motorization is china. ...read more.

Conclusion This paper has argued that there are several problems caused by motorization in cities. The international business groups presume upon that ecological modernization is possible for society to advance both economically and socially, in the meantime preserve the environment. They tend to further or encourage the scientific and technological progress but not attempt to limit to urban sprawl. In term of the degradation of public space, there are few or no technological interference available for the problems of land transition. The approach of ecological modernization would leave urban to sprawl further. We should realize that many technological developments are presently attainable but not far and wide utilized (Fisher and Freudenberg, 2001). Meanwhile, technological advances can not alone achieve the targets which are resource preservation and environmental protection. Overall, I am convinced that ecological modernization may fail to combat the problems under these circumstances and inevitably result in environmental degradation. ...read more.