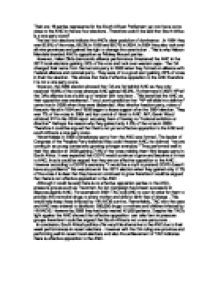 There are 16 parties represented in the South African Parliament yet non have come close to the ANC in the last four elections. Therefore could it be said that South Africa is a one party state?

Their are 16 parties represented in the South African Parliament yet non have come close to the ANC in the last four elections. Therefore could it be said that South Africa is a one party state? The last four elections indicate the ANC's clear posistion of dominance. In 1994 they won 62.6% of the votes, 66.3% in 1999 and 69.7% in 2004. In 2004 they also took over all nine provinces and gained the right to change the constitution. This is why Nelson Mandela branded ANC's opposition as 'Mickey Mouse' parties. However, Helen Zile's democratic alliance performance threatened the ANC in the 2011 local elections gaining 24% of the vote and took over western cape. ...read more.

They won 7% of the votes in 2004 and lost control of Natal to ANC. MP, Gavin Wood criticized IFP in his 2004 report accusing them of having no "national ambition or direction" Perhaps the reason why they gained only 4.5% of the votes in 2009. Therefore it could be argued that their is not yet an effective opposition to the ANC and south Africa is a one party state. Nevertheless in 2008 a breakaway party from the ANC was formed. The leader of Congress of the Peoples Party believed they could threaten ANC, he claimed "we are coming in as young contestants growing stronger everyday" They performed well in their first election in 2009 gaining 7.4% of the votes making them third largest party in South Africa. ...read more.

For example in 2001 TAC took ANC to court in order for them to provide Anti-retroviral drugs to every mother and child at birth free of charge. This would help keep those infected by HIV/AIDS survive. Remarkably, TAC won the case and ANC was ordered to distribute 200,000 drugs to mothers and children infected by HIV/AIDS. However by 2005 they had only treated 42,000 patients. Despite this TAC's fight against the ANC showed that effective opposition can take form in pressure groups therefore it could be argued that South Africa is not a one party state. In conclusion, South Africa's politics offer very little alternative to the ANC due to their weak performances in recent elections. However with the DA ruling one province and performing well in recent local elections and also the achievement of TAC indicates there is effective opposition to the ANC. ...read more.