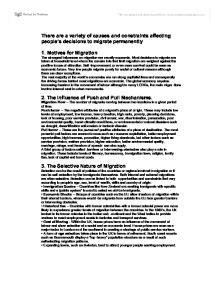 There are a variety of causes and constraints affecting people's decisions to migrate permanently 1. Motives for Migration The strongest influences on migration are usually economic. Most decisions to migrate are taken at household level where the constraints that limit migration are weighed against the positive forces of attraction. Self-improvement, or even mere survival could be seen as economic forces. Very few people migrate purely for social or cultural reasons although there are clear exceptions. The vast majority of the world's economies are run along capitalist lines and consequently the driving forces behind most migrations are economic. The global economy requires increasing freedom in the movement of labour although in many LEDCs, the main migrations involve internal rural to urban movements. 2. The Influence of Push and Pull Mechanisms. Migration Flow - The number of migrants moving between two locations in a given period of time. Push factor - The negative attributes of a migrant's place of origin. These may include low levels of employment, low income, heavy taxation, high rents, poverty, planning decisions, lack of housing, poor service provision, civil unrest, war, discrimination, persecution, poor environmental quality, harsh climatic conditions, or environmental or natural disasters such as drought, desertification soil erosion or tectonic disaster. Pull factor - These are the perceived positive attributes of a place of destination. The most powerful pull factors are economic ones such as resource exploitation, better employment opportunities, high incomes, promotion, higher living standards, but other factors such as service provision, welfare provision, higher education, better environmental quality, marriage, refuge, and freedom of speech can also apply. ...read more.

Racial tension is still an issue, particularly in some northern cities such as Oldham, Bradford and Burnley. INTERNAL MIGRATION � Since the 1970's, a large number of people have migrated away from the north and west of Britain to the south and east. This has been a response to the very different economic circumstances. The traditional heavy industries of cities such as Merseyside, Teesside or Newcastle-upon-Tyne, such as shipbuilding, chemicals, coal mining and iron and steel production, have declined or disappeared. The government has tried and succeeded in attracting new industries (such as Nissan cars) but they are not as labour intensive. � By contrast, modern economic growth has been concentrated in the southeast resulting in a drift of population southwards. The greatest growth has been in the counties around London such as Surrey, Kent and south Buckinghamshire, although there has also been growth along axes into Oxfordshire, Berkshire, Wiltshire, Dorset and East Anglia. It should be noted that some parts of inner London and north-east Kent have also suffered some of the problems usually associated with northern cities. Push factors of the North east (e.g. Newcastle-upon-Tyne) Pull factors of London and the Southeast Economic Decline in traditional industries. High unemployment. Closure of some services. Limited investment in new markets. Dynamic growth area. Access to EU markets. Large generally affluent home market. Easy contact with bankers and company headquarters. Social & Cultural Relatively low wages. ...read more.

These include: � The growth of vast sprawling spontaneous settlements (shanty towns) that lack basic amenities (although this may improve over time) � A shortage of school places, hospital beds and other services. � Congestion and high levels of air pollution (most migrants commute to the city centre or industrial areas for work). � A growing level of disease in the poorly served spontaneous settlements. � A shortage of jobs and low pay leading to a large informal sector. � Social problems of family breakdown, crime and delinquency. Smaller scale movements into the Brazilian Interior, particularly the Amazon, were encouraged in the 1970's by the government as part of a transmigration policy (free housing and land was offered). These have resulted in poor soil management, deforestation and soil erosion. More longterm migrations are associated with employment in logging and mining companies. Push and Pull factors from North East to South East Brazil Push factors from North East Brazil Pull factors to South East Brazil � Low, unreliable rainfall often less than 750mm � Periodic drought and crop failure � Poverty starvation and malnutrition � Limited employment opportunities and low wages � Low levels of land ownership � Overpopulation � High mortality rates, especially amongst the young � Infertile soil, often degraded and salty. � Better-paid factory jobs. � More employment opportunities including work in the informal sector. � More comfortable housing with opportunities to gain basic services such as water and electricity. � Access to services such as schools, medical care and entertainment. � Moore reliable sources of food. ...read more.