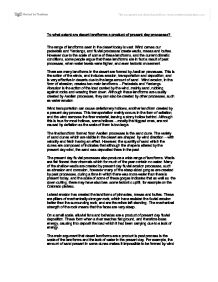 To what extent are deserts a product of present day processes?

To what extent are desert landforms a product of present day processes? The range of landforms seen in the desert today is vast. Wind carves our pedestals and Yardangs, and fluvial processes create wadis, mesas and buttes. However due to the scale of some of these landforms, and the current climatic conditions, some people argue that these landforms are in fact a result of past processes, when water levels were higher, and even tectonic movement. There are many landforms in the desert are formed by Aeolian processes. This is the action of the winds, and includes erosion, transportation and deposition, and is very effective in deserts due to the large amount of sand. Wind erosion, in the form of abrasion, creates two main landforms - Pedestals and Yardangs. Abrasion is the action of the load carried by the wind, mainly sand, rubbing against rocks and wearing them down. Although these landforms are usually created by Aeolian processes, they can also be created by other processes, such as water erosion. ...read more.

was more water than there is present today, and the scale of some of these gorges indicates that as well as the down cutting, there may have also bee. some tectonic uplift, for example on the Colorado plateau. Lateral erosion has created the landforms of pinnacles, mesas and buttes. These are pillars of mechanically stronger rock, which have resisted the fluvial erosion better than the surrounding rock, and are therefore left standing. The mechanical strength of the rock means that the faces are very steep. On a small scale, alluvial fans and bahadas are a product of present day fluvial deposition. These form when a river reaches flat ground, and therefore loses energy, causing it to deposit the load which it had been carrying due to a lack of energy. The main argument that desert landforms are a product is past process is the scale of the landforms and the lack of water in the present day. For example, the amount of sand present in some dunes makes it impossible to be formed by wind alone. ...read more.

Weathering in deserts is such a slow process because there is a lack of moisture and soil/organic acids, and the rocks are often mechanically strong. However, this means that different desert locations have different rates of weathering, and therefore in some the weathering could be classed as a present day process - for example although the process of wetting and drying may take a large amount of time, the granular disintegration of sandstone - where different crystals in the rock heat up and cool down at different rates - is constantly happening due to the high diurnal temperature ranges, and therefore these landforms are produced by present day processes. Landscapes formed by weathering must have been created during a time in which more water was present. In conclusion, many of the landscapes seen in the desert today are a product of present day processes shaping the land over a long period of time. However, the sheer scale of some of these indicates that the present day processes worked in combination with things ling tectonic uplift, and some landforms were not created by present day processes at all. ...read more.