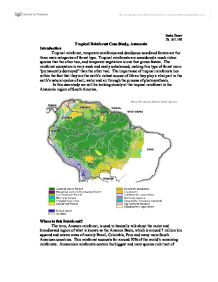 Sasha Zouev IB, 16/11/05 Tropical Rainforest Case Study, Amazonia Introduction Tropical rainforest, temperate coniferous and deciduous woodland forests are the three main categories of forest type. Tropical rainforests are considered a much richer species that the other two, and temperate vegetation is one that grows fastest. The rainforest ecosystem is very weak and easily unbalanced, making this type of forest more "permanently destroyed" than the other two. The importance of tropical rainforests lies within the fact that they are the earth's richest source of life as they play a vital part in the earth's natural cycles of soil, water and air through the process of photosynthesis. In this case study we will be looking closely at the tropical rainforest in the Amazonia region of South America. Where is this Rainforest? The term, Amazon rainforest, is used to basically talk about the moist and broadleaved region of what is known as the Amazon Basin, which is around 7 million km squared and covers areas of mainly Brazil, Colombia, Peru and many more South American countries. This rainforest accounts for around 50% of the world's remaining rainforests. Amazonian rainforests contain the biggest and most species-rich tract of tropical rainforest that there is to be found. It is the world's greatest natural resource - the most powerful and bio-actively diverse natural phenomenon on the planet. What exactly has happened? ...read more.

These roads were constructed in order to bring development to the region and to transport the timber, minerals, farm produce and the inhabitants. Also smaller highways have been constructed in the Amazon rainforest, along with several small airstrips. Global demand? The main types of resources found in the Amazon rainforest are: - Timber - usually hardwoods, and obtained by logging companies which fell the trees for markets in MEDC's. While this resource is a valuable source of income, little has been done to replant the deforested areas. - Minerals - give the region a vast natural resource. Minerals include iron ore, bauxite, and manganese, diamond, gold and silver. - Hydro electricity - an important renewable source of energy however the construction of dams and the creation of large reservoirs has caused much flooding. Rate of forest destruction. Studies vary as to how much of the Amazon rainforest has been deforested since clearances began in the 1960's. The World Bank gives an estimate of 15%, however some environmental groups claim that the figure could be up to a scary 40%, which, if accurate would indicate that roughly 15 hectares (15 full size football pitches) are cleared every minute. Consequences of logging/deforestation - Of the 30 million species on the face of the earth, roughly 28 million can be found in the Amazon (99% of those being insect). ...read more.

-Reduce the usage of heavy machinery, which at times has negative effects on the soil. - Put limitation on the quantity of large scale grazing, also to reduce effect of soil compaction - Encourage the production of sustainable products and crops including trees, rubber, brazilnuts, wax, honey and as I will explain below, ecotourism. Many organizations have demonstrated that if these plants were harvested sustainably - rainforest land has much more economic value than if timber were harvested or if it were burned down for cattle or farming operations. Sustainable harvesting of these types of resources provides this value today as well more long term income and profits year after year for generations to come. -Try to maintain the pH value of soil to limit high levels of acidity. Ecotourism / Conclusion Ecotourism, another strategy to help the rainforest, is a low-density type of tourism with little impact on the natural surrounding. It is important to locals as they have control over it and see benefits directly. These trips include little damaging technology, help waste get removed from the forest, include meals that are cooked with local ingredients, and the staff is usually local. Education about the rainforest is the central aim of the tour Brazil is certainly a land of astonishing beauty and biological diversity, and for these reasons deforestation is very troubling. Our actions today will show whether Earth will be impoverished biologically for the future generation. Sources: http://www.mongabay.com/brazil.html http://www.s-cool.co.uk http://www.ourplanet.com/aaas/pages/natural06.html# http://rain-tree.com/index.html ...read more.

A good general overview of the Amazon tropical rainforest, examining some of the reasons why it is in under threat and the activities that are taking place to threaten it. There are places where additional detail could be added to strengthen the case study.
4 stars