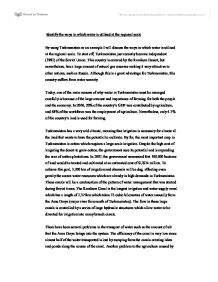 Identify the ways in which water is utilised at the regional scale By using Turkmenistan as an example I will discuss the ways in which water is utilised at the regional scale. To start off, Turkmenistan just recently became independent (1991) of the Soviet Union. This country is covered by the Karakum Desert, but nevertheless, has a large amount of natural gas reserves making it very attractive to other nations, such as Russia. Although this is a great advantage for Turkmenistan, this country suffers from water scarcity. Today, one of the main reasons of why water in Turkmenistan must be managed carefully is because of the large amount and importance of farming, for both the people and the economy. In 2006, 20% of the country's GDP was contributed by agriculture, and 48% of the workforce was the employment of agriculture. Nevertheless, only 4.7% of the country's land is used for farming. Turkmenistan has a very arid climate, meaning that irrigation is necessary for almost all the land that wants to have the potential to cultivate. By far, the most important crop in Turkmenistan is cotton which requires a large-scale irrigation. Despite the high cost of irrigating the desert to grow cotton, the government sees its potential and is expanding the area of cotton plantations. In 2007, the government announced that 100,000 hectares of land would be treated and cultivated at an estimated cost of $US74 million. To achieve this goal, 3,200 km of irrigation and channels will be dug, affecting even greatly the scarce water resources which are already in high demands in Turkmenistan. ...read more.

The consequences of this increase will be that some parts of the world will no longer manage to irrigate their land, causing them to run out of food. The greatest problem is that the supplies of water are unevenly distributed, even within countries. The United Nations (UN) made estimates that by the year 2025, two thirds of the world's population will be living in countries which have stress on their water supplies. The greatest inconvenience is that between 2000 and 2025 global industrial water will double and water used for agriculture, which is 70% of all water use, will increase by between 50% and 100%. Most of this increase in demand of water supplies will be done by the developing countries (LEDC's) as their industrial and population growth is supposed to increase at a faster rate. This shows the difference between physical water scarcity and economical water scarcity. Physical water scarcity occurs in places where the demand for water exceeds the supply and is most common in arid and semi-arid areas where water is very scarce because of very little rain fall and because of fluctuations of river flows or even rivers drying up during certain times of the year. On the other hand, economic water scarcity occurs when water is indeed available but, because of poverty, people are not able to obtain it. This is very common in LEDC's, mostly in urban areas where poor people live in shanty settlements. ...read more.

Third, for more than a billion people in developing countries, water is scarce and frequently contaminated, causing a health risk. In these parts of the world, contaminated drinking water along with primitive or nonexistent sanitation systems annually result in widespread illness and millions of deaths annually. The majority of the victims are children. In developing countries, people (usually women and children) often must walk long distances to find water. These village women from Pakistan's southern Sindh province embark on a water search, carrying traditional earthenware pots in addition to their small children. With 40 percent of the world's population facing water scarcity and some examples of these countries are Burkina Faso, Nepal or Honduras. In Burkina Faso one of the main problems confronting all citizens is insufficient drinkable water sources. This means that women must go get water for their families during most of the day, which restricts their ability to perform other necessary tasks. In Nepal, most of the countries' 20 million people have no water, no electricity, and limited access to health facilities. Women spend much of their time walking narrow paths in treacherous terrain to the nearest water source. The hike for water is difficult because some women must carry 50-pound jugs full of water for a long period of time. In Honduras, more than 81 percent of families have no access to drinkable water, electricity, or schools. We can come to the conclusion that since water is so important in our lives that the search and transport of water still takes over most of many peoples daily life time. ...read more.