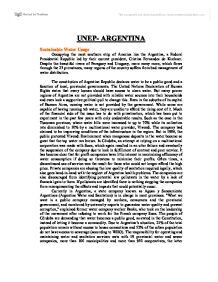 UNEP- ARGENTINA Sustainable Water Usage Occupying the most southern strip of America lies the Argentina, a Federal Presidential Republic led by their current president, Cristina Fernandez de Kirchner. Despite the beautiful rivers of Paraguay and Uruguay, more many more, which flows through the 23 pronvinces, many regions of the country suffers from bad management of water distribution. The constitution of Argentine Republic declares water to be a public good and a function of local, provincial governments. The United Nations Declaration of Human Rights states that every human should have access to clean water. But many poorer regions of Argentina are not provided with reliable water sources into their households and even lack a supportive political pull to change this. Even in the suburbs of its capital of Buenos Aires, running water is not provided by the government. While some are capable of having running tab water, they are unable to afford the rising cost of it. Much of the financial side of the issue has to do with privatization, which has been put to experiment in the past few years with only undesirable results. ...read more.

The people of C�rdoba are demanding that water becomes a public good, as stated in the Constitution, instead of letting it become a commodity. Due to Argentina's situation, 21% of the total population remain without access to house connections and 52% of the urban population do not have access to sewerage (according to WHO). The responsibility for operating and maintaining water and sanitation services rests with 19 provincial water and sewer companies, more than 100 municipalities and more than 950 cooperatives, the latter operating primarily in small towns. Among the largest water and sewer companies are Aguas y Saneamientos Argentinos (AYSA) and Aguas Bonarense S.A. (ABSA), both operating in Greater Buenos Aires, Aguas Provinciales de Santa Fe, and Aguas Cordobesas SA, all of them now publicly owned. In 2008 there were still a few private concessions, such as Aguas de Salta SA, which is majority-owned by Argentinian investors, and Obras Sanitarias de Mendoza (OSM), which is majority-owned by SUEZ. To improve these situations, many new projects have erected such as the Olavarr�a Landfill Gas Recovery Project. ...read more.

This system would reflect scarcity too. * In order for the above to work, more in-depth knowledge of the groundwater supply must be known. Those responsible for water management requires more training and information. GLOBAL EMISSION REDUCTION One of the key projects dedicated to the Kyoto Protocol is the Olavarr�a Landfill Gas Recovery Project which aims to capture and destroy the landfill gases through flaring of methane gas. The resulting reductions in landfill gas emissions will be monitored, verified, certified and sold as verified greenhouse gas emission reductions to the Community Development Carbon Fund (CDCF). The fund has agreed to purchase a total of 131,000 tons of carbon dioxide emission reductions equivalent. This partnership of four governments and 12 companies managed by the World Bank is designed to provide communities in developing countries, and in particular least developed countries with an opportunity to benefit from new investments in renewable energy and clean technology that aim to reduce greenhouse gas emissions and mitigate the effects of climate change, while measurably improving the welfare of the communities involved. The Olavarr�a CDCF project proves that carbon finance has become an essential tool in improving solid waste management practices," said Abel Mejia, Sector Manager for Environment at the Latin America and Caribbean Region of the World Bank ...read more.