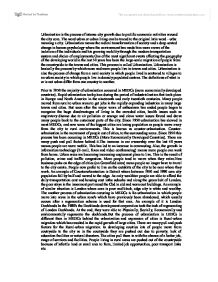 Urbanisation - how cities differ in LEDCs from those in MEDCs.

Urbanisation is the process of intense city growth due to prolific economic activities around the city core. The word urban or urban living can be traced to the original latin word - urbs: meaning a city. Urbanisation means the radical transformation of society and a deep-seated change in human psychology where the environment has made him more aware of the isolation of the individuals and his growing mobility through the modern transportation system and choice of employments.One of the most significant events affecting the geography of the developing world in the last 50 years has been the large-scale migration of people from the countryside to the towns and cities. This process is called Urbanisation. Urbanisation is basically the process by which more and more people live in towns and cities. Urbanisation is also the process of change from a rural society in which people lived in scattered to villages to an urban society in which people live in densely populated centres. The definitions of what is or is not urban differ from one country to another. Prior to 1950 the majority of urbanisation occurred in MEDCs (more economically developed countries). Rapid urbanisation took place during the period of industrialisation that took place in Europe and North America in the nineteenth and early twentieth centuries. ...read more.

The another process of urbanisation occuring in MEDCs is Re-urbanization in which people move into areas in the urban zone's which have previously been abandoned, which usually occurs after a regeneration scheme is used for that area. An example of it is London Docklands In the 1980's the Docklands development corporation took the task of regenerating of London Docklands. At the end, they were able to Physically, Socially, Economically and environmentally regenerate the docklands.But the procees of urbanisation in LEDCs is different than in MEDCs behind the urbanization and expansion of cities is Rural-urban migration which has resulted in the rapid growth of large cities. There are many pull and push factors for the Rural-urban migration. In developing coutries lots of people move from coutryside to the city as in the coutryside they are pushed out due to poverty, lack of education facilities or natural disastors. The cities pull them in with the chance of a better job, range of services and facilities. People living in rural areas are pushed out of the countryside because of infertile land or small area to farm, limited job opportunities, poor transport links etc. The reasons of the urbanisation in LEDCs are quite different and the city structure results back from different happenings in the past. ...read more.

Only shops with high revenue or successful service supplier are able to pay these high rental costs. The same counts for regions like Chelsea,West London or Manhattan; only very wealthy people are able to afford these high class accommodations, one can say that higher amount of trees or green the higher the prices for property. After people started moving from the city the issues of traffic congestion worsened, the problem is the big highways or auto-routes lead towards the city but the smaller and narrowed older city streets cannot cope with the huge amount of traffic in a short period of time, most cities introduce car free zones or car free days in order to take pressure of the environment and air pollution. The problem in LEDCs is that the cities grew far too rapid in a short time period. The cities were not able to supply enough housing for the increasing population, this triggered the building of shanty towns, slums and ghettos. The high quality housing area which dates back to colonial times started to find itself surrounded by crime,dirt and a hunger. The problems in shanty towns are immense, the lack of a sewage system, electricity, clean watersupply, food supply and water disposeals generate a population at its limits. Because sewage and waste is disposed to rivers and others sources of natural clean water supply ...read more.