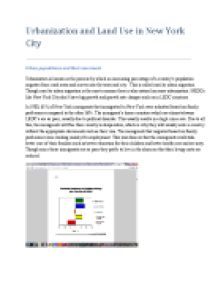 Urbanization and Land Use in New York City

﻿Urbanization and Land Use in New York City ________________ Urban populations and their movement Urbanization is known as the process by which an increasing percentage of a country?s population migrates from rural areas and moves into the town and city. This is called rural to urban migration. Though rural to urban migration is the most common there is also natural increase urbanization. MEDCs like New York City don?t have big growth and growth rate changes such as in LEDC countries. In 1980, 61% of New York immigrants that immigrated to New York were admitted based on family preferences compared to the other 36%. The immigrant?s home countries which are almost always LEDC?s are so poor, usually due to political disorder. This usually results in a high crime rate. Due to all this, the immigrants will flee their country in desperation, which is why they will usually enter a country without the appropriate documents such as their visa. The immigrants that migrated based on family preferences were looking mainly for employment. ...read more.

The highest residential densities are found in inner-city areas. As you go further away from the city centre the residential density increases. Housing in NYC is mostly based on their life cycle, income and ethnicity. In many cities there are clearly defined ethnic or racial areas. Examples include Harlem in New York and Watts in Los Angeles. Often times a family and or population group chooses to live apart from the dominant population in order to maintain their cultural integrity, this is known as positive segregation. Other times the minority is excluded from society and is unable to afford the housing in more affluent areas, this is known as negative segregation. The total number of slum dwellers in the world stood at about 924 million people in 2001. This represented about 32% of the world?s total urban population, but 78.2% of the urban population in LEDC?s. Slums are typically located in areas that planners do not want such as steep sloped areas or flood paths. Gentrification is the reinvestment of capital into inner-city areas. It refers mostly to an improvement of residential areas, although there is an economic dimension too. ...read more.

Some block fronts that are found in the residential districts can or may have a commercial overlay district as well. This is done in order to provide a neighborhood with the luxury of retail services such as retail stores. The Limited Height Districts or LHD for short are but another type of overlay district. This overlay district however imposes height limitations on any new buildings that are to be constructed in certain areas. These areas include, historic districts designated by the NYC Landmarks Preservation Commission or LPC for short. The informal sector or informal economy is that part of an economy that is not taxed, monitored by any form of government, or included in any gross national product (GNP), unlike the formal economy. Other terms used to refer to the informal sector can include the black market, the shadow economy, the underground economy and System D. Associated idioms include under the table, "off the books" and "working for cash". The informal sector is part of every city and is involved in every community. It provides people with jobs and though they may not be legitimate jobs they are not illegal either and therefore still provide income to the poorer population. ...read more.