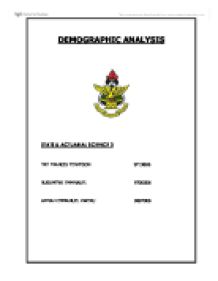 Most of them in search of greener pastures. This has resulted in the high rate of unemployment and increase in social vices. The average fertility rate has seen much improvement since the last census. It has decreased from 6.2 to 4.2 as an estimate to the number of children an average woman would have during her reproductive years. With this fertility rate, migration has also declined. The number of the young migrating has reduced. The country still needs to provide more facilities to cater for the population growing now. More schools need to be built, job opportunities made available all to cater them. Because of the high number of the young in the population, there is the risk of social vices especially from the young who do not make it in life. ...read more.

This referring to the ratio of the dependent-age population (the young and the old) on the working-age population. Here the dependency ratio is 0.75 meaning there are 0.75 dependents per working-age person which is nearly one dependent for each working age person. This is a fair heavy load as compared with that of the world which has 0.56 as dependency ratio. For individuals with large families, this impact is very visible. Even those without children are also affected since the effect of higher taxes to pay school fees; health facilities and good adequate housing to support accommodate all. Workers end up saving less because they have to spend on their families and dependents. The government also loses because more money goes in subsidizing food housing and education instead using the monies for more development such as road, power etc ?? ?? ?? ?? ...read more.