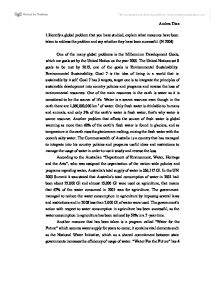 Water Shortages in Australia and the Government's Response.

1.Identify a global problem that you have studied, explain what measures have been taken to address the problem and say whether they have been successful. (N 2004) One of the many global problems is the Millennium Development Goals, which are goals set by the United Nation on the year 2000. The United Nations set 8 goals to be met by 2015; one of the goals is Environmental Sustainability. Environmental Sustainability, Goal 7 is the idea of living in a world that is sustainable by it self. Goal 7 has 3 targets, target one is to integrate the principles of sustainable development into country policies and programs and reverse the loss of environmental resources. One of the main resources in the earth is water as it is considered to be the source of life. Water is a scarce resource even though in the earth there are 1,360,000,000 km3 of water. ...read more.

"Water For the Future" has 4 main principles such as taking action on climate change, using water wisely, securing water supplies and supporting healthy rivers. Other vital elements of the program are the Water Act 2007 and the Council of Australian Government Work Program on Water Agreed Actions 2008, both in relation to the Murray-Darling Basin, the most agriculturally productive area of Australia and home to the Murray River and the Darling River. Even though all these actions have been taken by the government nation-wide, other actions have been taken by each state as each of Australia's 8 states has a different approach to the problem as there are vital differences such as population, water supply, water shortage, rainy season, etc. The state of Victoria, located at the southern coast of Australia has 5 million habitants and 80% of Victoria's population is focused on Melbourne, it's capital. Melbourne has integrated rules and regulations as part of their policies. ...read more.

Melbourne's citizens have managed to reduce their shower time as well as fitting water saving shower heads and they have managed to only use on average 131 liters of water a day including the water they use for laundry, cooking, washing and cleansing. In conclusion the Commonwealth of Australia is a country that has managed to successfully address the problem of integrating the principles of sustainable development into country policies and programs by introducing policies such as the National Water Initiative, the Water Act and the COAG Work program on Water agreed actions and programs such as "Water for the Future", Melbourne's programs both the restrictions and the "Save Water Target 155" program, and reversing the loss of environmental resources such as water by reducing the amount of water used in agriculture by 50% and encouraging their citizens, specially Melbourne's citizens to use less than 155 liters of water a day. Andrea Diaz ...read more.