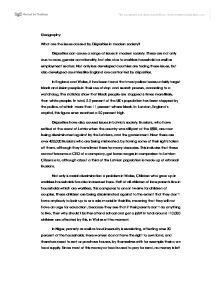 What are the issues caused by Disparities in modern society?

Geography: What are the issues caused by Disparities in modern society? Disparities can cause a range of issues in modern society. These are not only due to race, gender or nationality, but also due to workless household as well as employment sectors. Not only less developed countries are facing these issues, but also developed countries like England are confronted by disparities. In England and Wales, it has been found that most police forces unfairly target black and Asian people in their use of stop and search powers, according to a watchdog. The statistics show that Black people are stopped 6 times more likely, than white people. ...read more.

Not only is racial discrimination a problem in Wales, Children who grow up in workless households has also increased here. Half of all children of lone parents live in households which are workless, this compares to one in twelve for children of couples. These children are being discriminated against to the extent that they don't have anybody to look up to or a role model in their life, meaning that they will not have an urge for education, because they see that if their parents don't do anything to live, then why should I bother attend school and get a job? In total around 110,000 children are affected by this, in Wales at the moment. ...read more.

The last issue I want to point out is the employment sector, which has led to instability in modern society between the formal and informal sector (economic activity that is neither taxed nor monitored by a government). Due to the informal sector, people have suffered the consequences of not being insured at work, being paid a steady wage, having job security, as well as not having a chance at promotion in their life, in comparison to the advantages which a formal sector job brings. In conclusion, disparities do not only occur in less developed countries, even the UK is affected by the range of issues these disparities cause, including racial, gender and national discrimination, but also the affect of children brought up in workless households, and the informal employment sector. Fabian Middelmann 599 Words ...read more.