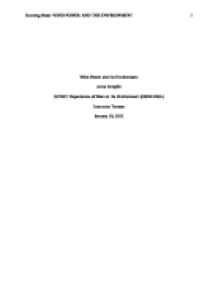 Wind Power and the Environment

Wind Power and the Environment Anna Templin SCI207: Dependence of Man on the Environment (GSM1148A) Instructor Termos January 10, 2012 Wind Power and the Environment The use of fossil fuels will not continue to sustain the current level of energy use forever and the greenhouse emissions produced by fossil fuels are not good for the environment. Fossil fuels are not only harmful to the environment but also to the economy. It is time for communities and governments to look toward renewable energy sources. One of the most favorable renewable and green energy sources is wind power. The question of how green wind power is though was asked almost 20 years ago and is still in the process of being answered. Wind power is very renewable and economically friendly, but it also affects biospheres, native wildlife, and the natural wind flow. There are many pros and cons to wind energy that must be evaluated. ...read more.

environmentalist opposing the turbines because the possibility of death to migratory birds, the noise they created, and that they were just plain ugly wind turbines still have a long haul to prove themselves as an acceptable source of energy (Deal, 2010). The deaths of migratory birds and bats have been another hindrance for wind turbines putting some wind farms at a halt during inspections and studies. January of 2012, this month, The U.S. Fish and Wildlife Service is scheduled to pronounce new guidelines for wind farms to monitor the safety of wildlife. The guidelines would be optional, but those who do not make changes will most likely face fines or penalties if their turbines kill a federally protected animal. John Anderson the director of siting policy for the American Wind Energy Association agrees to the guidelines from the U.S. Fish and Wildlife, but thinks if the wind farms are following the guidelines they should not get stuck with large fines for accidental wildlife deaths. ...read more.

It could negatively affect avian wildlife, but with research that could be very minimal and worth the risk. The debris left behind by an unused windmill would be minimal if any compared to the dangers of abandoned oil rigs. Turbines are powered by wind naturally and do not need any supplemental fuels making the energy collected virtually free providing electricity at a very low cost which would improve the economy also helping with sustainability. Renewable energy is a necessity that must be invested in to improve the lives of not only the current population, but for the generations to come. The impact of pollution from refineries to separate fossil fuels into usable energy is not worth the risk of polluting the air and water humanity needs to survive. Wind energy could be a very capable replacement although studies are still being done to determine how green wind power really is there has been a step toward making the world a little cleaner through renewable energies. ...read more.