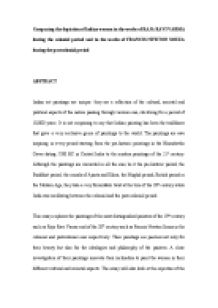 ﻿Comparing the depiction of Indian women in the works of RAJA RAVI VARMA during the colonial period and in the works of FRANCIS NEWTON SOUZA during the postcolonial period ABSTRACT Indian art paintings are unique: they are a reflection of the cultural, societal and political aspects of the nation passing through various eras, stretching for a period of 10,000 years. It is not surprising to say that Indian painting has been the trailblazer that gave a very exclusive genre of paintings to the world. The paintings are awe inspiring in every period starting from the pre-historic paintings in the Bhimabetka Caves dating 5500 BC in Central India to the modern paintings of the 21st century. Although the paintings are immortal in all the eras, be it the pre-historic period, the Buddhist period, the murals of Ajanta and Ellora, the Mughal period, British period or the Modern Age, they take a very formidable twist at the turn of the 20th century while India was oscillating between the colonial and the post-colonial period. This essay explores the paintings of the most distinguished painters of the 19th century such as Raja Ravi Varma and of the 20th century such as Francis Newton Souza in the colonial and postcolonial eras respectively. Their paintings are peerless not only for their beauty but also for the ideologies and philosophy of the painters. A close investigation of their paintings unravels their inclination to paint the women in their different cultural and societal aspects. The essay will also look at the expertise of the painters in the art of painting the women with a view to looking at the contrast in their outlook to their objects of paintings. INTRODUCTION Indian art is renowned for the exquisite paintings of the women belonging to different ages. Whether the women signify the ancient deities or the pioneers of feminism, they have always held a prominent role on the oeuvre of the artists. ...read more.

The early revival of modern Indian art is traceable to Raja Ravi Varma. He introduced the technique of oil painting as well as western composition and perspective. His work was representational, almost illustrative, with Rubens like plump females representing females and goddesses. His technique was later supplemented by the wash technique, which was made use of in full by painters like Souza. In 1947 when India became independent it became easier for artists to travel abroad to become better acquainted with different artistic tendencies, to the extent that western 20th century art began to dominate work of many artists in India. Soon Indian artists began rejecting the dominance of the subject to concentrate on colour, shape, texture and rhythm. It is this time that marks the rise of Souza. Postcolonial period is notable in India as it gave the artists to blend Indian art with the Western art. And the most remarkable painter of the postcolonial era is undoubtedly Souza, born in the Portuguese colony of Goa in 1924. He grew into an orthodox Roman Catholic family, and was lucky enough to observe different cultures at the same place-the Hindu, the Portuguese and the Catholic Christian. At a tender age his art was drawn to the difference between the teachings of two polar cultures-the erotic Indian art and the repressive dictates of the church. Souza called this duality ?sin and sensuality.? No doubt under these circumstances Souza started painting both the cultures-from the baby figure of Christ, the body of Madonna, the head of John the Baptist to the sensual and statuesque nudes of Indian women, which would soon transcend to those of the nude women as drawn by Matisse and Picasso. However apart the two painters might have been, both began from the same soil and with the same technique. Both used Paints made from leaves, flowers, tree bark and soil, and made innovations with their techniques. ...read more.

These chemically altered works frequently involved sexual imagery. Souza also made a collage and in the top of which he wrote? Erotic art USA.? Many of his drawings such as ?Seated girl? and ?Lovers? are considered highly erotic. In the seated girl he draws an attractive young girl. Her sex is exposed and one of her hands rests behind her head. Her posture shows the contours of her body throwing a connotation that she is a call girl. Her eyes passively staring at the client show her submissiveness to him. In the words of a critic Terence Mullaly, ?the sinister twist to Souza?s imagination tends to express itself either in excessive violence, or distastefully in pornography.? But in Souza?s words, ?my paintings are not the product of love or anger. They are simply a product of my libido.? In his other drawings such as ?Woman Bathing? and ?Nude? Souza experimented with figurative work in nuances of grey. He does not look inclined to drawing attractive ladies here. Instead his canvas is covered by fleshy nudes with pregnant belies, short legs. May be he draws our attention again to the stout bodies in Indian sculptures. They grey paintings evoke a question-what made Souza draw in grey?. The answer is simple. In the fifth and sixth decades of the 20th century it was feared that the world was heading to a nuclear war. In the wake f the nuclear was Souza said, ?It is all wrong and will end in ashes. That?s why my painting is in grey.? More than erotic or beautiful his drawings are experiments in placing the structure of such figures within a bold painting. In his drawing ?Madonna and Child? he gives the Biblical theme a new twist. He draws it in in an impasto style and the bare bosomed Madonna looks unattractive. On a deeper look this drawing shows that other than the title there s nothing religious about this painting. It appears that Souza does not pay reverence to Christian deities. He not only casts Madonna nude and crude but also makes the baby Christ look very plain. ...read more.