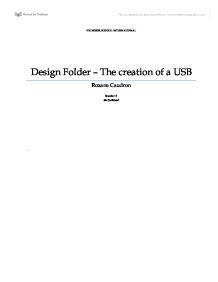 PECHERSK SCHOOL INTERNATIONAL Design Folder - The creation of a USB Roxane Caudron Grade 11 Mr Cuthbert . Specifications: What does a USB Device need to have? ESSENTIAL DESIRABLE 1) It must be small enough to fit into a pocket and be easily handled. 2) It must have some area on it where you can attach a keychain or string for holding and practicality. 3) It must be appropriately aesthetically designed according to the desired audience/customer. 4) It must be sturdy and not easily broken if it is dropped or a little roughly handled for example. 5) It has to be water resistant (but not necessarily water-proof) so that it can still function if exposed to a humid environment. 6) It must be easy to insert and eject from the computer- only some force must be required. 7) When inserted it should stay plugged in to the computer and only manage to be plugged out if it is pulled or a certain amount of force is applied to it. This way if someone walks with the computer and tilts it for example or simply repositions the computer the USB will not fall out and no work will be lost. 8) It should have some form of physical protection or cap to apply when not in use avoid the insertion of particles of dust or water into the USB that could compromise its way of functioning. 9) It should have a USB plug at the end of it so i can be plugged into the computer easily- every computer has at least one. So additional cable should be necessary for functioning of this device. 10) It should be an appropriate price considering its size in Gigabytes. Price somewhat guarantees quality in general. 11) It should come at a size appropriate for the target audience; you would not sell a device that can only store 2gb and that has a childishly colourful design on it if your target audience is business men who usually need ...read more.

After this i plugged it into the computer and the same pop up window appeared than in the previous scenario meaning the USB was detected and functioning. I then tried to save files to it and open some of the existing ones on the flash drive and those worked perfectly well. Hence we can say that the casing of this USB is at least water resistant and a little humidity will not impair its function. 6 - PASS As is seen here the device fits perfectly well into the USB plug of the computer and not much force was necessary to insert it. The only difficulty i came across was the fact the charger needs to be plugged in right next to the usb which makes it a little difficult to manage sometimes if the charger get sin the way. However, this isn't because the USB is to wide, it is just because of the designing of the computer and in no way impairs the USB's functioning. 7 - PASS I had no problems with this test, i could move the laptop about all i wanted and the USB never unplugged itself or fell out, the grip was good and the only way it could fall out was if there was a sudden rough movement and I hit it for example. Test successful. 8 - PASS This USB doesn't have a cap really however it is retractable in a sense that there is a sliding switch on the side of the device that you can move so that the Plug area of the USB is inside the casing and protected or so that it is outside of the casing and ready for use. This does mean however that the USB isn't as well protected as it could be with a cap to cover it however this is evidently not necessary as even after being exposed to a very humid environment the USB functioned just as well. ...read more.

Another thing i found great in the manufacturing process is all the intricate and precise machinery that had to be developed to make the creation of USBs possible; all the machines have a particular input and output involved in very complicated or precise actions. This proves to what extent we have refined and developed the technology in the manufacturing department today. However, there is one thing i would probably change to the manufacturing process if i could however is the fact that they still use manual labour for two parts of the making process. The last part simply has to do with putting USBs in boxes and checking by the weight of the box if the right amount has been entered. Because this has a test after it with the weight scale I don't think this part should necessarily be changed, it is not too difficult and human error would rarely if never occur here. However, in about the middle of the manufacturing process there is a lot of manual labour involved in sticking on the logos of the company to the USB. I don't doubt that the people who do this have become professionals at it after a while however i do believe that there is room for a lot of human error here and if in the end a consumer ends up buying a USB with a slanted sticker on it, it just doesn't look professional at all to me and would reflect back on the company. Plus, it has occurred to me that these jobs would leave a great opportunity for corrupt companies to have child labour or have illegal migrants working for very little money. It struck me as being something very odd that on any video i watched regarding the making process of a USB all employers at this stage were either Chinese or suspiciously young looking. However, nothing proves that anything illegal was going on and this is just a potential concern i would have checked out if it were my company. ...read more.