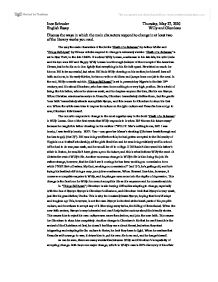 Discuss the ways in which the main characters respond to change in at least two of the literary works you read. (Things Fall Apart &amp; Death of A Salesman)

Discuss the ways in which the main characters respond to change in at least two of the literary works you read. The way the main characters of the books 'Death of a Salesman' by Arthur Miller and 'Things Fall Apart' by Chinua Achebe respond to change is extremely similar. 'Death of a Salesman' is set in New York, in the late 1940's. It is about Willy Loman, a salesman in his late 60s, his wife Linda and his two sons Biff and Happy. Willy Loman is a thorough believer of the concept of the American Dream, but he holds on to it so tightly that everything in his life falls apart. He wished so much for his son Biff to be successful, but when Biff finds Willy cheating on his mother, he himself loses all faith and now, in his early thirties, he has no wife or children and jumps from one job to the next. In the end, Willy commits suicide. "Things Fall Apart" is set in present-day Nigeria in the late 19th century, and it is about Okonkwo, who has risen from nothing to a very high position. ...read more.

All he had to do was pass math, and he would be off to college. If Biff hadn't discovered his father's affair in Boston, he wouldn't have given up on his future, and this is what bothers Willy the most -it dictates the rest of Willy's life. Another enormous change in Willy's life is him losing his job. It's rather strange, however, that he didn't see it coming: he has been working on commission for a while ("BIFF: He's off salary. My God, working on commission!" (act 1)"), he's getting old, and he's trying his best but still doing a very poor job as a salesman. When Howard fires him, however, it comes as a complete surprise to Willy, and he plunges even more into the depths of depression. This change is the final one for Willy: he cannot accept his life as it is anymore and he commits suicide. In "Things Fall Apart", Okonkwo is also having difficulties adapting to change, especially with the loss of Nwoye. Nwoye is Okonkwo's eldest son, and Okonkwo feels that Nwoye is very weak, just like his grandfather, Unoka. ...read more.

Both have one major change, which in Willy's case is Biff's discovery of his affair (after this everything seems to go downhill), and in Okonkwo's case it is the loss of Nwoye. However, Biff's discovery is one major occurrence that causes many other events, while for the loss of Nwoye it is the other way around: a few smaller instances (the death of Ikemefuna, the constant nagging and beating of his father) cause the major event of Nwoye joining the Christians. Another similarity is that both the fathers 'lose' their sons, however, Nwoye is truly 'lost' for Okonkwo, because he now completely shuns his own son, while Willy is incredibly disappointed because he wished more for his son. Another obvious similarity is that both deal with change so horribly that in the end they both give up and commit suicide. In conclusion, both Willy from 'Death of a Salesman' and Okonkwo from 'Things Fall Apart' cannot handle change; they are both very inflexible and they will only seek for everything to go back to the way it was. 892 words Inez Schroder Thursday, May 27, 2010 English Essay Willy and Okonkwo ...read more.