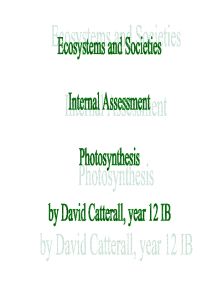 Photosynthesis (explained) One of the most common producers is green plants. These organisms absorb light energy from the sun or chemical reactions to convert carbon dioxide to organic matter. Green plants can also use water to convert carbon dioxide to organic compounds such as sugar glucose. The result of this is that it releases oxygen as a by-product. This process driven by light energy is photosynthesis. Using the method of photosynthesis, plants are able to create every complex organic molecule which form their body by using mineral nutrients such as sulphur, phosphorus, potassium and nitrogen which can be retrieved from either soil or water. A green pigment called chlorophyll is one of the molecules that are used to absorb light energy in photosynthesis. It is obvious to be able to identify which plants photosynthesise by looking at they're colour. If it is green, then it photosynthesises. ...read more.

Place three other beakers away from any contact of the heat lamp or the sun 3. Fill each beaker with 400 millilitres of water 4. Place two leaves from a Gardenia Augusta Magnifica plant into each of the six beakers 5. Put one test tube over the narrow end of each funnel 6. Put each funnel over the plant and make sure that the plant is completely under the funnel 7. Set up the timer so that it is ready to start as soon as the heat lamp is turned on 8. Turn on the heat lamp 9. Every twelve minutes, for an hour, measure the water level through each of the funnels/test tubes 10. Graph/table your results when completed GRAPHS Beakers Exposed to Heat Rise in mL Time (minutes) Beaker 1 Beaker 2 Beaker 3 12 0 0 0 24 0 0 0 36 0 0 0 48 0 0 0 60 0 0 0 Beakers Un-Exposed to Heat Rise in mL Time (minutes) ...read more.

Another was that the water seemed to be evaporating when it was exposed to the heat lamp. This could be the link to the bubbles when the water was evaporating. There were many things that could have been improved throughout this investigation that could possibly have gotten better results: * A longer testing time could have given it more of a chance to produce better results. * The choice of plant could have possibly been an issue as it may not have been a water plant so it would not have the same response to a water plant such as Elodea which was unavailable. * While the experiment was a group experiment and this report is individual, other group members failed to have much of an input in the planning as they were either away or late to class. In conclusion, the hypothesis suggested for this experiment has failed due to the errors listed above. This is evident from the lack of results appearing in the graphs and tables. ...read more.