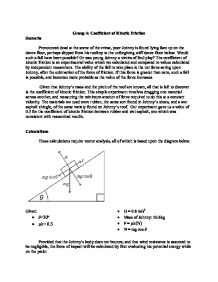 Group 4 Friction Lab - did Johnny slip from the roof or was he pushed?

Group 4: Coefficient of Kinetic Friction Scenario Pronounced dead at the scene of the crime, poor Johnny is found lying face up on the dance floor, perhaps slipped from his rooftop to the unforgiving stiff dance floor below. Would such a fall have been possible? Or was young Johnny a victim of foul play? The coefficient of kinetic friction is an experimental value which we calculated and compared to values calculated by independent researchers. The ability of the fall to take place is the net force acting upon Johnny, after the subtraction of the force of friction. ...read more.

The materials we used were rubber, the same sort found in Johnny's shoes, and a wet asphalt shingle, of the same variety found on Johnny's roof. Our experiment gave us a value of 0.3 for the coefficient of kinetic friction between rubber and wet asphalt, one which was consistent with researched results. Calculations These calculations require vector analysis, all of which is based upon the diagram below. Given: * ?=30� * �k= 0.3 * G = 9.8 m/s2 * Mass of Johnny: 56.8kg * F = �k(N) ...read more.

mg sin ?= 278.32 N F = �k(N) F =(0.3)(482.10) F= 141.62 N The calculations show that the friction force, F, was less than the force with which Johnny would have slid off the roof, meaning that it is very likely in his inebriated state Johnny fell by himself, without any foul play. Conclusion If the net force on the body is greater than zero, then the body will slide down the inclined plane with acceleration (g sin ? - fk/m), where fk is the kinetic friction force. Calculations performed to determine the force of impact on the body utilise an initial velocity of 0 Newtons, arrived at through this calculation. ...read more.