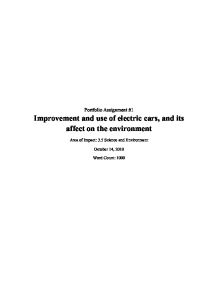 ITGS Portfolio Assignment #1 Improvement and use of electric cars, and its affect on the environment Area of Impact: 3.5 Science and Environment

Portfolio Assignment #1 Improvement and use of electric cars, and its affect on the environment Area of Impact: 3.5 Science and Environment October 14, 2010 Word Count: 1000 Presentation of the issue: As technology improves, more electric cars are being used in today's society. Electric cars that recharge off the coal power grid are one type of electric cars that will be used more frequently in the future. Electric cars are supposed to reduce the amount of city pollution by having no emissions of any carbon dioxide or any other harmful particles, but studies have shown that burning coal for electricity can be just as harmful to the environment as using gasoline cars. New electric cars are invented to keep up with the vast increase in technology, resulting in an issue regarding equality of access. The new electric cars that are being manufactured can have a higher price tag, due to the input of the newest technology; therefore not all individuals would be able to afford this type of car. Another issue would be regarding reliability. 1In order to run an electric car, it needs to be charged 10-12 hours to fully charge the vehicle, because of the electric car's large need of time to be charged, efficiency and reliability problems can arise. Users may not be to use the car whenever they want and they may not be able to use it for as long as they want. Also, the invention of these electric cars that recharge off the coal power grid can in turn, increase the amount of carbon dioxide in the atmosphere, thus degrading our environment. Information Technology Background of the Issue: Electric cars have been around since the end of the 19th century and it has always been said that it can help improve the environment and the atmosphere, but that may not be 100% true. The increase amount of electric car usage and the increase of new technology built into the new electric cars can lead to an increase in pollution. ...read more.

Germany plans to be generating 100% of it's electricity from renewable means by 2050. That's certainly something to look forward to in the future. This means that if you're fortunate enough to recharge an electric car from a completely clean and renewable resource, then the vehicle will operate without a single breath of Co2. So for the time being you can relax. It seems you have nothing to feel guilty about when plugging in your electric car from coal generated electricity. The only question remaining is how many additional power stations are needed to cover the demands of all these electric cars http://www.gavinshoebridge.com/electric-cars/dirty-electric-cars-powered-by-dirty-coal/ How Electric Cars Work by Marshall Brain Charging an Electric Car Any electric car that uses batteries needs a charging system to recharge the batteries. The charging system has two goals: * To pump electricity into the batteries as quickly as the batteries will allow * To monitor the batteries and avoid damaging them during the charging process The most sophisticated charging systems monitor battery voltage, current flow and battery temperature to minimize charging time. The charger sends as much current as it can without raising battery temperature too much. Less sophisticated chargers might monitor voltage or amperage only and make certain assumptions about average battery characteristics. A charger like this might apply maximum current to the batteries up through 80 percent of their capacity, and then cut the current back to some preset level for the final 20 percent to avoid overheating the batteries. Jon Mauney's electric car actually has two different charging systems. One system accepts 120-volt or 240-volt power from a normal electrical outlet. The other is the Magna-Charge inductive charging system popularized by the GM/Saturn EV-1 vehicle. Let's look at each of these systems separately. The normal household charging system has the advantage of convenience -- anywhere you can find an outlet, you can recharge. The disadvantage is charging time. ...read more.