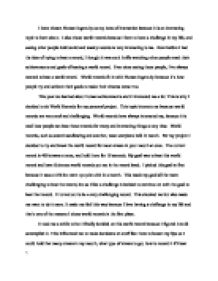 Personal project - I have chosen Human Ingenuity as my Area of Interaction because it is an interesting topic to learn about. I also chose world records because I love to have a challenge in my life, and seeing other people hold weird and wacky records i

I have chosen Human Ingenuity as my Area of Interaction because it is an interesting topic to learn about. I also chose world records because I love to have a challenge in my life, and seeing other people hold weird and wacky records is very interesting to me. Even before I had the idea of trying to beat a record, I thought it was such thrills watching other people reach their achievements and goals of beating a world record. Ever since seeing those people, I've always wanted to beat a world record. World records fit in with Human Ingenuity because it's how people try and achieve their goals to make their dreams come true. This year we learned about human achievements and it interested me a lot. This is why I decided to do World Records for my personal project. This topic interests me because world records are very cool and challenging. World records have always interested me, because it is cool how people can beat these records for crazy and interesting things at any time. World records, such as sword swallowing and another, most scorpions held in mouth. For my project I decided to try and break the world record for most straws in your mouth at once. The current record is 400 straws at once, and held there for 10 seconds. ...read more.

Then I had a brilliant idea, start a new world record! That way I would be guaranteed a spot in Guinness World Records. But, the more I looked into it the more complex I realized it was. First the Guinness team had to review and debate the submission, deciding if it was "record material" or not. Then they would have to interview eye witnesses about whether or not you actually did it (applies to all records, but Guinness is especially strict about new records). So I kept that idea for a while and thought of things that I could do but they either turned out to be too hard to do, or turned out that Guinness would not accept it as a record, therefore I wouldn't be accomplishing my goal. I would just be doing something crazy for the heck of it, which wasn't the point of my goal. So I pondered on the idea of starting a new record but after I couldn't really come up with anything with the help of anyone I decided to just look for a simpler, already existing, record to beat. So I kept looking and came up to the record of most straws held in mouth at once, which was 256 at the time but then moved up to 400 in a month. I thought I could still beat it though. ...read more.

Completing all this research and this project was an excellent learning experience for me. It helped me understand world records a lot more than I already did. It helped me understand why people chose to break world records, and why they choose crazy records to beat. I have more respect for people who beat these records, especially now that I know how hard it is to beat a record, and how much preparation you need to get ready to beat a record. It also taught me a lot about human ingenuity, and how much people worked for these places in the world record book. Next time I'm looking through a world record book I will probably not look at the records and say "Oh! That looks easy! I could beat that at anytime!" For now I realize records are a lot more challenging then the people in the world record books make them appear. They seem so easy, but they are really, actually, quite hard. I actually, really appreciate world records a lot more now that I understand them more. I don't just say there stupid or cool, but I appreciate them for what they are. Human ingenuity comes in many forms and, although at first glance it may appear that world records are spur of the moment and fun activities to be done in your spare time, this project has shown me that there is lots of thought and effort put into them. ?? ?? ?? ?? 2 1 ...read more.