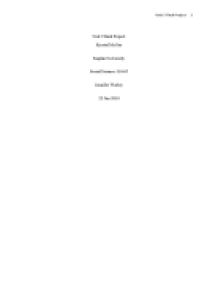 Social Science Final Project- How have the events and issues of the 60s impacted your personal life?

﻿Unit 9 Final Project Unit 9 final Project Krystal McGee Kaplan University Social Science 310-05 Jennifer Worley 22 Jun 2010 ________________ How have the events and issues of the 60s impacted your personal life? I was born in 1960 and although I was young and did not understand a lot of what was going on during those days I gained knowledge and understanding of the times through my parents and basically took on their point of view of the world until I was old enough to understand things for myself. The sixties for me was a time in which the living was easy, food was cheap the stores had penny candy and you could actually go places and leave your door unlocked because no one would dare come into your home besides your neighbors would watch out for you. Despite all the turmoil that was occurring in the 60's I must admit I have never felt the peace of mind and safety I once felt in those days long gone, one reason could have been that I was just too young to understand all that was going on around me. I was brought up in a Christian home where my father was a minister with a strong love for God. ...read more.

Although I did not fully understand the whole concept of war I knew he was home now. As time went on and I got older I never really understood why my parents were so happy about my brother not going to war. Wasn't it the patriotic thing to do? How can you love this country and not want to fight for it? Why would my parents not want to support the war like all other parents? After talking with my parents about this later in life I learned that they like many other blacks did not feel like this was our country. Blacks were just barley given the right to vote, the right to work in a decent working environment for decent wages, or just to be treated like men and women, why in the world would blacks want to die for a country that treats animals better than them? Looking back over the history and times I began to understand how they must have felt about the draft. The draft was hitting most poor and black families the hardest. As I look back over my life and think how the previous mentioned situations affected me I believe the Social psychologist theory best fits. ...read more.

Factors such as class, nationality, race, ability, religion, ethnicity, sexuality, age and education determine whether some woman will benefit by globalization. Some women will significantly benefit from current global trends through better employment opportunities and autonomy, access to new technologies and increased purchasing power, however cuts in social services, increased privatization and a flexible labor force are all characteristics of globalization. These cuts where the government have pulled back from spending in areas of health care and education forces women to make up for these shortfalls. Globalization has changed the way America as well as other countries work together. Many smaller countries benefit from our increased exports and imports which in turn strengthens our tides and trust. Through globalization and technology development the future of all countries are in a much better position. Reference: Association for Women in Development (AWID), ?Re-inventing Globalization,? at the Human Rights Internet (HRI) website, www.hri.ca/women/news/index/awid.shtml, Retrieved 22 Jun 2010 from www.womensrightsworld.com Excerpted from Compton's Interactive Encyclopedia Copyright (c) 1994, 1995 Compton's NewMedia, Inc. Retrieved on 22 Jun 2010 from http://www.wic.org/misc/history.htm Hannah Selgison, Beyond the bedroom: What the Birth Control Pill Really Did For Women, 5-12-2010, Retrieved on 22 Jun 2010 from www.forbes.com Harrison, B. & Dye, T. (2008) Power and society: an introduction to the social sciences. Mason, OH: Thomson Wadsworth. ...read more.