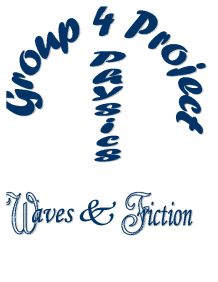 ? Aim "To investigate if the performance of a swimmer is affected by the waves occurring in the swimming pool from other swimmers?" Background knowledge A wave is a periodic disturbance whereby energy is conveyed from one place to another in a medium without the transfer of matter. In this experiment of ours the main properties that will affect the swimmer are; Amplitude Wave length and frequency. We say this because the higher the amplitude the more the energy the wav possesses and the aster the frequency the more momentum the wave has at the wave front. Thus with this I mind we hypothesize: "The performance of a swimmer is directly influenced by their interaction with waves" We first got our idea of our investigating after observing the waves produced by a swimmer and a boat. The frontal curved waves caused by the forward thrust of the body and the triangular end waves caused partially by the propellant were always visible. We suspected these waves to have an impact on the body and thus decided to investigate. Due to the hypothetical nature of this experiment, no numerical data was collected. The variables that were considered were: Variables Independent variable > Speed of the swimmer Dependant variable > Force acting on swimmer from other waves Controlled variable > The swimmers Apparatus * Camcorder * 2 Swimmers: Shahbaz Mir and Dennis Mailu * Bamboo Procedure Test Run To do the test run, we simulated the swimmers using bamboo. ...read more.