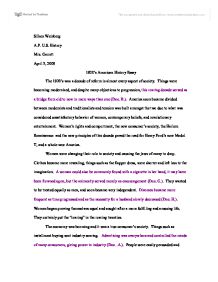 Silken Weinberg A.P. U.S. History Mrs. Garrett April 3, 2009 1920's American History Essay The 1920's was a decade of reform in almost every aspect of society. Things were becoming modernized, and despite many objections to progression, this roaring decade served as a bridge from old to new in more ways than one (Doc. B.). America soon became divided between modernists and traditionalists and tension was built amongst the two due to what was considered unsatisfactory behavior of women, contemporary beliefs, and revolutionary entertainment. Women's rights and comportment, the new consumer's society, the Harlem Renaissance and the new principles of this decade paved the road for Henry Ford's new Model T, and a whole new America. ...read more.

Things such as installment buying sent industry soaring. Advertising was everywhere and controlled the minds of many consumers, giving power to industry (Doc. .A.). People were easily persuaded and easily entertained. The public enjoyed a new type of music, literature and art known as the Harlem Renaissance. This revolution of the arts was the ultimate expression of Negro life. The new negro movement was truly in vogue and was just as part of the 1920's as anything else. Even white people would flock to the negro cabarets just for the sheer amusement of watching negroes dance, and play the newly created form of music known as jazz (Doc. ...read more.

C.). The school teacher was convicted guilty, but paid hardly any sentence. These new beliefs caused controversy and brought America to a new level of freedom, and a different take of the first amendment. This decade was truly the bridge of old to new, tradition to modernism. The American people sought for more in life, and wanted to truly embark on their rightful pursuit of happiness. Negroes and women worked for equality and others fought for a halt to progression. Regardless, the 1920's introduced the American people to look at life in a whole new way and is very influential to the way society is today. ?? ?? ?? ?? ...read more.