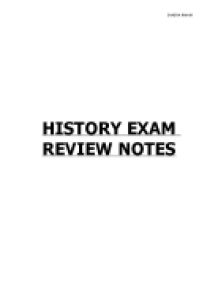 ﻿SHAERA RAHIM HISTORY EXAM REVIEW NOTES Before World War One French/English Canadians Dispute South African War (1899-1902): Discovery of rich goldfields in Transvaal and Orange Free State brought and inrush of British settlers British government tried to bring these states under its control ? starting war British government asked Canada and other empire countries for help - If Prime Minister Wilfred Laurier agreed, he would lose French Canadian support, disagreed would lose English Canadian support. The Naval Issue (1907 -1910): When Britain and Germany were in a naval race, Britain feared falling behind and asked Canada and members of empire for financial contributions to British navy. Laurier wanted to please those with British ties and French Canadians. Introduced Naval service bill, this would create Canada?s own navy, which would protect Canada?s coasts thus easing the burden on British navy. This navy could also be placed under British control during time of war. Conscription Crisis: By 1916 the number of volunteers needed over seas had dropped. Canadian government created the Military Service act which forced men to fight overseas Pacifists, French Canadians, factory workers and farmers strongly opposed. Created bitter division between French and English Canadians. World War One WWI begins: Assassination of Archduke Franz Ferdinand and his wife (heir to the Austria Hungary throne) by Gavrio Princip (Serbian Nationalist) in Sarajevo, Bosnia. Austria Hungary declared war on Serbia Therefore Russia declared war on Austria Hungary (agreed to protect Serbia from Austria-Hungary) Germany then declared war on Russia, followed by war on France as well Britain and British Empire (including Canada) declare war on Germany. New and Improved Weapons: Tanks, Airplanes, Submarines. Battles of world war one: 1915 ? Ypres 1916 ? The Somme 1917 ? Vimy Ridge 1917 ? Passchedale Canada?s hundred days: Aug 4th ?Nov 11th Armistice signed ending WWI; Canada?s Hundred Days was a series of attacks made along the Western Front by the Canadian Corps during the Hundred Days Offensive [The Hundred Days Offensive was the final period of the ...read more.

Union Nationale: A regional party formed in the 1930’s by Maurice Duplessis. Fought for rights of French Canadians. It forever changed the relationship between provincial and federal government and French and English Canadians in Québec. The party consistently urged French Canadians to defend their rights. Platform was to defend French language, religion and culture World War Two: League of Nations: The League of Nations was founded in 1919 The leagues main purpose was to truly make the First World War the war to end all wars, by bringing world peace. Was a failure - The Manchurian Crisis Japan invaded then occupied the Chinese province of Manchuria in 1931. The league asked Japan to withdraw from Manchuria, Japan ignored this request. The league also condemned Japanese action – and Japan withdrew from the league. When Japan ignored these requests it was clear the league had no power of its own. - Invasion of Abyssinia (1935) Benito Mussolini built up forces along border and launched a full scale attack on Abyssinia. The league imposed a boycott against trade with Italy, but there was little world enthusiasm for this economic The rise of Adolf Hitler: Hitler came to power on a commitment to regain Germanys honour lost during the treaty of Versailles and re-gain lebensraum (living space) Hitler favoured Anschluss Fascism and Anti-Semitism: Fascism is Political Ideology of Dictatorship. Originated by Benito Mussolini (Italian Dictator) in 1922. New Technologies: Airplanes extended the battle field to include more of enemy land Long range bombers Faster tanks Blitzkrieg: surprise, speed and weigh of attack, using the tank and warplane. First the airforce would attack, bombing enemy positions and airfields; then heavy tanks would smash through the front. German strategy also known as lightning war. A fast attack on many countries in Eastern Europe. In April 1940 Germany attacked Norway, Denmark and in may – Holland, Belgium and Luxembourg. Germany troops then marched into France, followed by Greece and Yugoslavia in 1941. ...read more.

Lester B. Person suggested forming a United Nations Emergency force that would keep combat apart while a settlement was worked out. His idea was a success and he was awarded a Nobel Peace Prize for his efforts. NATO: North Atlantic Treaty Organization Defence alliance that express purpose of discouraging soviet expansion into Western Europe. NATO members r USA, Britain, France Canada NORAD: North American Air defence System Created to protect against soviet expansion into western Europe The Cuban Missile Crisis: October 1962 ? Soviet Union had placed missile in Cuba, brought tension to NATO countries. Americans sought support for forces on alert, but John Diefenbaker ? Canadian prime minister was very slow to respond United Nations: Successor of League of Nations, created by 50 countries including Soviet Union, USA, Canada, Britain. All major powers became members of United Nations. Peacekeeping Social Security: People wanted social security like they received during the depression, so government of Canada in 1950?s introduced a number of social security measures which drastically improved the health of Canadians. Total war: Warfare where all of a country's available resources, military as well as civilian, are employed Rhineland: Rhineland is a former provincial electoral division in the Canadian province of Manitoba. It was created by redistribution in 1892, and eliminated in 1914, when it merged into the new riding of Morden and Rhineland. It was re-established in 1949, and eliminated again in 1989. As its name implies, Rhineland was home to several German settlers, many of whom were Mennonites. It is named after the Rhineland region of Germany Suburbia: Suburbs Marshall Plan: The Marshall Plan (officially the European Recovery Program, ERP) was the large-scale economic program, 1947?51, of the United States for rebuilding and creating a stronger economic foundation for the countries of Europe Common Wealth of Nations: The Commonwealth of Nations, normally referred to as the Commonwealth and formerly known as the British Commonwealth, is an intergovernmental organisation of fifty-four independent member states. All but two (Mozambique and Rwanda) of these countries were formerly part of the British Empire. ...read more.