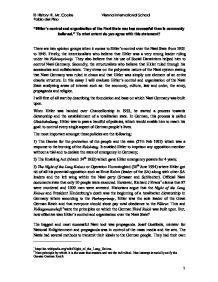 Hitlers control and organization of the Nazi State was less successful than is commonly believed. To what extent do you agree with this statement?

"Hitler's control and organization of the Nazi State was less successful than is commonly believed." To what extent do you agree with this statement? There are two opinion groups when it comes to Hitler's control over the Nazi State from 1933 to 1945. Firstly, the intentionalists who believe that Hitler was a very strong leader ruling under his Fuhrerprinzip. They also believe that his use of Social Darwinism helped him to control Nazi Germany. Secondly, the structuralists who believe that Hitler ruled through his accessories and collaborators. They stress on the polycratic nature of the Nazi system stating that Nazi Germany was ruled in chaos and that Hitler was simply one element of an entire chaotic structure. In this essay I will evaluate Hitler's control and organization of the Nazi State analyzing areas of interest such as: the economy, culture, law and order, the army, propaganda and religion. I will first of all start by describing the foundation and base on which Nazi Germany was built upon. When Hitler was handed over Chancellorship in 1933, he started a process towards dictatorship and the establishment of a totalitarian state. ...read more.

Hence the 3K's : Kinder, Kirche und Kuche5. In school, teachers had to be of pure Aryan blood. They shaped the minds of their students with new and adapted subjects such as Science of the races (promoting anti-Semitism). Students were disciplined in Physical Education (15% of school time) which served as a pre-war training. Gifted students were sent to the Nationalpolitische Erziehungsanstalten (NPEA) boarding schools, as they were to be the future leaders of the Third Reich. Even though Hitler had the youth in the palm of his hand, there was some minor opposition. The Edelweiss Pirates was a youth group from children aged 14 to 18, which opposed Nazi ideals, especially the Hitler Youth. The Swing Kids was another group of middle and upper class young adults, which enjoyed Jazz/ Swing music and idealized the American way of life. Law and order in the Nazi Regime was developed as a policy of intimidation. The German police (controlled by Heinrich Himmler) ensured that nobody went against Nazi ideal and those who did were to pay the price. In Nazi Germany, the police were allowed to arrest people without a trail. ...read more.

The plan ended up being rather unsuccessful because of overproduction and its nature of disorder. "The Nazi economic program did not have the characteristics of a complete dictatorial economy such as the Soviet one but neither did it have a capitalist system relying on private enterprises". It was on an uncertain midpoint.12 Even though the Nazi system had several flaws and in the end it did not have a complete totalitarian nature, Hitler did indeed succeed at controlling most aspects of German society. It is probable that his initial intention was not of a completely passive German society (leisure activities) because part of his success came from the immense support and involvement from the German people itself. That is why I would have to lean on to the structuralist theory as Hitler's policies did indeed bring him great success. I therefore disagree with the essay question as Hitler had Germany fairly under control. 1 http://en.wikipedia.org/wiki/Night_of_the_Long_Knives 2 Nazi principle by which it is the state that matters and not the individual. Nazi attempt to racially unify the Greater German Reich 3 The People�s Observer 4 Living space 5 Children, church and kitchen 6 http://www.historylearningsite.co.uk/nazi_police_state.htm 7 My struggle 8 http://www.bookrags.com/essay-2005/9/25/213718/540 9 http://www.educationforum.co.uk/NaziEconomicPolicy1933.pdf 10 Winter relief program 11 http://en.wikipedia.org/wiki/Winterhilfswerk 12 http://en.wikipedia.org/wiki/Nazi_Germany IB History HL Mr. Cooke Vienna International School Pablo del Pino 1 ...read more.