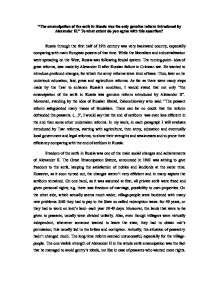 "The emancipation of the serfs in Russia was the only genuine reform introduced by Alexander II." To what extent do you agree with this assertion? Russia through the first half of 19th century was very backward country, especially comparing with main European powers of that time. While the liberalism and industrialization were spreading on the West, Russia was following feudal system. The turning-point- idea of great reforms, was made by Alexander II after Russian failure in Crimean war. He wanted to introduce profound changes, for which the army reforms were kind of base. Thus, later on he undertook education, law, press and agriculture reforms. As far as there were many steps made by the Tsar to enhance Russia's condition, I would stated that not only "the emancipation of the serfs in Russia was genuine reform introduced by Alexander II". Moreover, standing by the idea of Russian liberal, Zaionchkovsky who said: "The peasant reform safeguarded many traces of feudalism. There can be no doubt that the reform defrauded the peasants. ...read more.

However, the rest of the aims, which were about to ensure better life to the most numerous social group in backward Russia, eventually weren't satisfying. Army reforms, the first that initiated other changes in Russia, were eventually more successful than emancipation of serfs. Even though all the reforms were subjected into army reforms, actually the changes in Russian army were dependent on the other aspects. Thus, followed by Alexander II's assumptions, the number of soldiers was increased- by replacing recruitment with conscription (many soldiers were peasants), more efficient equipment and methods of trainings were introduced, people in army were more educated. The Russian army rapidly became more professional, taking benefits also from the industrial and economic development of the country (railways built). Also, the changes in army included shortening time of service for conscripts, followed by service in reserve- this enabled males to lead normal life in non-war period, increasing the satisfaction of military active group of people. All the changes focused on army succeeded and they significantly fulfilled their aim- improving Russian army. ...read more.

Moreover, he maintained his full control over police. In courts, the new, objective way of judging encouraged bribes; political issues were judged the same way as before reforms. In case of legal and governmental reforms, some introduced changes were visible but still the influence of the Tsar, coming out from his will to maintain autocratic rule, was the most determining for the policies. Reforms initiated by Alexander II- to improve Russia's condition and to overtake developed West, were definitely the most far-reaching than any others of previous tsars. Son of Nicholas I, aware of the backwardness of his country decided to introduce changes which were supposed to increase status and welfare of Russia , keeping his autocratic power at the same time. Each of his reforms had its successes and failures. However, claiming that "the emancipation of serfs was the only genuine reform" made by Alexander II is, at least in my opinion, a misunderstanding. Taking into account, to what extend the aims of singular reforms were achieved, abolishing serfdom for a long time actually didn't bring any changes, whereas the effects of other reforms were visible among society in a short period of time. ...read more.