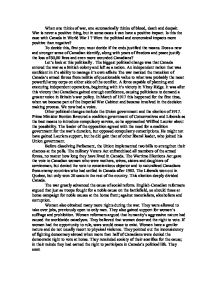 The political and economical impact of the First World War on Canada was more positive than negative. How far would you agree with this statement?

When one thinks of war, one automatically thinks of blood, death and despair. War is never a positive thing, but in some cases it can have a positive impact. Is this the case with Canada in World War I ? Were the political and economical impacts more positive than negative? To decide this, first you must decide if the ends justified the means. Does a new and stronger sense of Canadian identify, along with years of freedom and peace justify the loss of 60,00 lives and even more wounded Canadians? Let's look at this politically . The biggest political change was that Canada entered the war as a British colony and left as a nation. An independent nation that was confident in it's ability to manage it's own affairs The war marked the transition of Canada's armed forces from militia of questionable value to what was probably the most powerful army corps on either side of the conflict. A force capable of planning and executing independent operations, beginning with it's victory in Vimy Ridge. ...read more.

The Liberals won out in Quebec, but only won 20 seats in the rest of the country. This election deeply divided Canada. The war greatly advanced the cause of social reform. English-Canadian reformers argued that just as troops fought for a noble cause on the battlefield, so should those at home campaign for noble causes at the home front; against materialism, alcoholism and corruption. Women also obtained many more rights during the war. They were allowed to take over jobs, previously open to only men. They also gained support for women's suffrage and prohibition. Women reformers argued that humanity's aggressive nature had caused the worldwide cataclysm. They believed that women deserved the right to vote. If women had the opportunity to rule, wars would cease to exist. Women have a gentler nature and do not usually resort to physical violence. They pointed out the inconsistency of fighting democracy abroad when more than half of Canadians were denied the democratic right to vote at home. They reminded society of their scarifies for the cause; in their minds they had earned the right to participate in Canada's political life. ...read more.

The government also introduced direct taxation. First it imposed a business-profits tax, then in 1917, it imposed its first federal income tax; 3% for a family earning more than $3000 or an individual earning more than $1500. The increased cost of living hurt people on fixed income and cancelled the benefits workers received from increased wages. None of these may be overly positive things, but it did set up a foundation for modern economics. In conclusion, I agree to an extent that the political and economic impact of the First World War was more positive than negative. Politically speaking this is definitely true, not so much for economic but, all in all the war may have been a terrible event, and many lives may have been lost, but it had good results. Here we are today, still a well-known, independent nation, known for our freedom and peace. This is all thanks to the impacts of the First World War. How can that be a negative thing? " The political and economical impact of the First World War on Canada was more positive than negative." How far would you agree with this statement? Chantelle McMullin History 12 IB Word count: 914 Sept. 26th/08 ?? ?? ?? ?? ...read more.