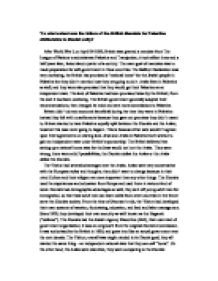 To what extent was the failure of the British Mandate for Palestine attributable to Zionist unity?

'To what extent was the failure of the British Mandate for Palestine attributable to Zionist unity? After World War I, on April 24 1920, Britain was granted a mandate from The League of Nations to administrate Palestine and Transjordan; it took effect three and a half years later, lasted about quarter of a century. The main goal of mandates was to made preparation for self-government in these countries. The Balfour Declaration was very confusing, the British has promised a "national home" for the Jewish people in Palestine but they didn't mention how they are going to do it. Arabs lives in Palestine as well, and they were also promised that they would get their Palestine as an independent state. The land of Palestine had been promised twice by the British; from the start it had been confusing. The British government generally adopted their recommendations, then changed its mind and sent more commissions to Palestine. ...read more.

Zionists had demographic advantages as well, they sent off young adult men for immigration, so that these adult men can learn skills from other countries in the future serve the Zionists society. From the time of Ottoman's rule, the Yishuv had developed their own systems of taxation, fundraising, education, and land and labor management. Since 1920, they developed their own security as well known as the Haganah ("defense"). The Zionists had the Jewish Agency Executive (JAE), their own kind of government organization; it was an outgrowth from the original Zionists Commission. It was authorized by the British in 1920, and grew into like an actual government over the next decade. The Yishuv, overall was single minded in its Zionist goal, they all wanted the same thing - an independent national state that they can call "home". On the other hand, the Arabs were disunited, they were comparing to the Zionists uneducated, with only a few rifles and small arms, they rescued about 300 Jews. ...read more.

The Arab Revolt in the 1916, made British attitude towards the mandate horrible. There were those who dislike the Arabs, there were those who dislike the Jews and there were those who dislike both. "Arabs and Jews and Christians, in Syria and Palestine, they are all alike, a beastly people. The whole lot of them is not worth a single Englishman!" The troops don't even want to be in Palestine to make it a livable place so that the Zionists and the Arabs can both live peacefully in it. In conclusion, British didn't do a very good job on building the mandate into its independence, Palestine is not a recognized country in some places. The British left behind much progress for the United Nations to do. The Zionists were not the one who causes the failure of the mandate in Palestine. The Arab Revolt, Britain's attitude towards Palestine and its way of confusing commissions were the causes of its mandate in Palestine. ?? ?? ?? ?? ...read more.