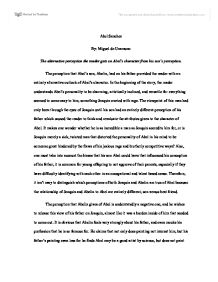 Abel Sanchez By: Miguel de Unamuno The alternative perception the reader gets on Abel's character from his son's perception. The perception that Abel's son, Abelin, had on his father provided the reader with an entirely alternative outlook of Abel's character. In the beginning of the story, the reader understands Abel's personality to be charming, artistically inclined, and versatile for everything seemed to come easy to him, something Joaquin envied with rage. The viewpoint of this man had only been through the eyes of Joaquin until his son had an entirely different perception of his father which caused the reader to think and revaluate the attributes given to the character of Abel. It makes one wonder whether he is as incredible a man as Joaquin accredits him for, or is Joaquin merely a sick, twisted man that distorted the personality of Abel in his mind to be someone great hindered by the flaws of his jealous rage and brotherly competitive ways? Also, one must take into account the biases that his son Abel could have that influenced his conception of his father; it is common for young offspring to not approve of their parents, especially if they have difficulty identifying with each other in an occupational and talent based sense. ...read more.

Joaquin defends Abel by stating that it shows his integrity and trust in his son, choosing not to use punishment as a means of consequence. During that conversation, it is clear the differences in opinion between Joaquin and Abelin. Although Joaquin may have been disagreeing to comfort Abelin and to hide his secretive loathing for his father, the contrast between both perceptions thus far in the book is tremendous. Joaquin's using "children" as a tool of revenge. It is blatant throughout the book that Joaquin's obsessive jealousy and hatred for Abel is unhealthy and insane, indicating that his character is in a poor mental state as he so often admits. He does many irrational and cruel things to make himself feel better, such as through that banquet for him and appraise his success, which somehow makes Joaquin feel better in a cynical sense. Joaquin never does anything for Abel for any other intention other then selfish purposes to ease his troubled mind. When he embraced his friend after giving that seemingly heartwarming speech, he wished to crush Abel in his arms. Another indication of Joaquin's insanity was when he was faced with a conscious decision where the fate of Abel was left in his ...read more.

The sad essence of Joaquin is that he so desperately wishes he was not like the way he is, and desires not to think and do the things he does in spite of this man, which is seen through his writings in the Confession. He writes to his daughter, "Only by linking your fate with young Abel, the son of the man who had poison the fountain of my life, only by mixing our two blood lines could there be any hope for my salvation". He indicates and confesses here that he had lied to his daughter when explaining why he should marry Abelin; his intentions were those of his own gratification and twisted satisfaction to ease himself of his troubling burden of Abel's being. Joaquin even went so far as to convince Abelin that his daughter Joaquina was in love with him and hoped for a mutual return of feelings, deceiving both his daughter and respected friend in order to satisfy himself in a sick way. He discusses human tragedy, and desires for the children of them to fight so he knows in his mind that he will not be the only one to feel pain and suffering. ...read more.