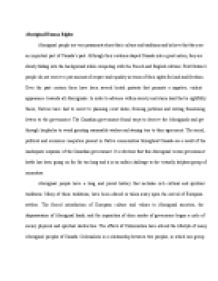 ﻿Aboriginal Human Rights Aboriginal people are very passionate about their culture and traditions and believe that they are an important part of Canada?s past. Although their customs shaped Canada into a great nation, they are slowly fading into the background while competing with the French and English cultures. First Nation?s people do not receive a just amount of respect and equality in terms of their rights for land and freedom. Over the past century there have been several brutal protests that promote a negative, violent appearance towards all Aboriginals. In order to advance within society and claim land that is rightfully theirs, Natives have had to resort to planning court dates, forming petitions and writing threatening letters to the government. The Canadian government found ways to deceive the Aboriginals and get through loopholes to avoid granting reasonable wishes and staying true to their agreement. The social, political and economic inequities present in Native communities throughout Canada are a result of the inadequate response of the Canadian government. It is obvious that this Aboriginal versus government battle has been going on for far too long and it is an unfair challenge to the virtually helpless group of minorities. Aboriginal people have a long and proud history that includes rich cultural and spiritual traditions. ...read more.

The first residential schools were set up in the 1830?s. After 1879, the government decided that a formal residential school system be run by the churches. During these times, the system forced children to be separated from their families, and forbade them to speak their own language. If these rules were broken, children were severely punished. During the 1920s, it became compulsory for all Aboriginal children over the age of seven to be sent to residential schools, which, in many cases, thousands of kilometers away from their homes. By 1931, there were 80 residential schools built across Canada. The health effects of the residential schools were devastating. Children died of tuberculosis and other diseases that swept through the poorly ventilated schools. Many children were also verbally, psychologically, physically, and sexually abused (Canadian Encyclopedia). As the public began to understand the devastating impacts of the Residential School System on Aboriginal children, the government began phasing out compulsory residential school education in the 1950s and 1960s (Indigenous Foundations UBC). It was the general belief of government authorities at the time that Aboriginal children could receive a better education if they were transitioned into the public school system. Residential schools, however, persisted as a sort of boarding school for children whose families were deemed unsuitable to care for them. ...read more.

Far too many politicians make the mistake of letting ?their ego and a belief in their own press clippings stand in the way of common sense. It took 44 days for common sense to prevail? (Huffington Post). Now that her strike has been resolve, it remains debatable if Chief Spence accomplished very much. Time and history will be the final judge on that point. To this day, Aboriginals continue to struggle yet very little is being done about their situation. The government played a great role in shaping their lives from what was to what is now. From the days of colonialism, the Aboriginal peoples have been marginalized and been forced to assimilate into mainstream Canada through the method of Residential schools. This is evident in to the social, economic and political inequities ever since the beginning of the European settlers and been neglected by the government. Throughout, these inequities still present themselves through the history of the Canadian Aboriginals; from the White Paper protest to the Hunger Strike that was recently declared. It is evident that there as been inadequate response from Canadian government. Although they have programs that support the Native communities, it feels as though that is is the only response to these struggles from the Canadian government. There is not enough support or facilitation to ensure that the Native communities are well-off to live in a free country and have their traditions and culture be part of their lives. ...read more.