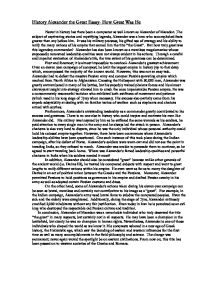 History Alexander the Great Essay- How Great Was He Never in history has there been a conqueror as well known as Alexander of Macedon. The subject of captivating stories and mystifying legends, Alexander was a hero who accomplished feats greater than any before him. It was his military prowess, his gifted use of strategy and his ability to unify the many nations of his empire that earned him the title "the Great". But how truly great was this legendary commander? Alexander has also been known as a merciless megalomaniac whose supposedly renowned leadership qualities were not always evident in his actions. Through a careful and impartial evaluation of Alexander's life, the true extent of his greatness can be determined. First and foremost, it is almost impossible to overlook Alexander's greatest achievement. ...read more.

There is no one else in history who could inspire and motivate his men like Alexander did. His military was inspired by him as he suffered the same wounds as his soldiers, he paid attention to every single man in the army and he always led the attack in person. Alexander's charisma is also very hard to dispute, since he was the only individual whose personal authority could hold his colossal empire together. However, there have been occurrences where Alexander's leadership abilities have been questioned. One such instance of this took place during the Indian campaign, after his defeat of Porus. Alexander's soldiers were worn-out and did not see the point in invading India, so they refused to march. Alexander was unable to persuade them to continue, so he agreed to start traveling back home. ...read more.

Additionally, during the siege of Tyre, Alexander ruthlessly crucified 2,000 inhabitants without any fair justification. Even today in Iran he is perceived as an evil king who destroyed the respectable old Persian culture and tradition. In conclusion, Alexander of Macedon was a remarkable individual who truly deserved the title "the great" in many respects, but certainly not in all respects. He may have been a champion in the battlefield, but clearly he was no champion in human rights. Nevertheless, Alexander is one of those individuals who shaped the world as we know it. His conquests ushered in a new age of Greek history, the Hellenistic age, which saw the blending of eastern and western influences for the first time as well as many accomplishments in the field philosophy and science. The change was permanent; never again would the spotlight be on eastern civilizations. From now on, this title has been passed on to western societies of the Greeks and Romans. ...read more.