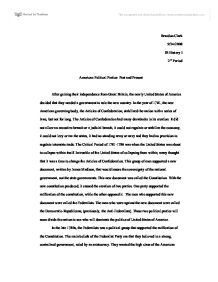 American Political Parties: Past and Present

Brandon Clark 9/24/2008 IB History I 2nd Period American Political Parties: Past and Present After gaining their independence from Great Britain, the newly United States of America decided that they needed a government to rule the new country. In the year of 1781, the new American governing body, the Articles of Confederation, stabilized the nation with a series of laws, but not for long. The Articles of Confederation had many drawbacks in its creation: It did not allow an executive branch or a judicial branch, it could not regulate or stabilize the economy, it could not levy or tax the states, it had no standing army or navy and they had no provision to regulate interstate trade. The Critical Period of 1781-1786 was when the United States was about to collapse within itself. In trouble of the United States of collapsing from within, many thought that it was a time to change the Articles of Confederation. This group of men supported a new document, written by James Madison, that would insure the sovereignty of the national government, not the state governments. This new document was called the Constitution. With the new constitution produced, it caused the creation of two parties. One party supported the ratification of the constitution, while the other opposed it. ...read more.

Most of the population in both France and the United States of America were farmers and lower class citizens. The farmers and lower class citizens did not want Federalists, who supported an aristocracy, to rule the country because they did not want their rights to be threatened by the higher class aristocrats. Alexander Hamilton wanted America to be an industrialized country like Britain in order to expand the country and to let the economy grow. Thomas Jefferson, the political rival of Hamilton, wanted America to be an agrarian society, so that the poor and lower classes would not suffer poor conditions of living, as in Britain or any other industrialized countries. In today's politics, the Democratic Party is battling the Republican Party for the 2008 election. The two candidates of the 2008 election are Barack Obama of the Democratic Party and John McCain of the Republican Party. Today, the Democratic Party is very liberal and has many firm beliefs in which the government should be run. The Democratic Party emphasizes strong economic growth, affordable health care for all Americans, retirement security, open, honest and accountable government, and securing our nation while protecting our civil rights and liberties. The Democratic Party deals with the working class as well as the poor and lower classes. ...read more.

So over time, the political parties had switched ideas and concepts because to make improvements to the party or the environment had changed it. How would you compare today's economic situation with the economic situation then? Back in the 1780s, the Articles of Confederation had caused a scar in the American economy. Local banks and the state governments were printing their own currency and the effect was that it created an inflation among the collies and congress that no power to regulate trade among the states. The troubled economy hit the newly American nation hard from foreign debts and the rise of inflation because Congress had no power with economics at the time. Dealing with the economy today, the economy of the United States of America is going in its slow period in the graph. Right now, the economy is slow and not much for improvement. Obama wants to create a plan to jump start the economy to its fast pace. From the political parties of Hamilton and Jefferson to the political parties today, the differences of the political parties of America have helped shaped America as it is today. The brilliant ideas of Hamilton, Madison and Jay had reformed the government of the late 1780s, to a new more powerful nation. the debates of Obama and McCain today has a lot of influences today on politics. ...read more.