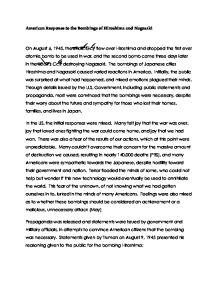 American Response to the Bombings of Hiroshima and Nagasaki

American Response to the Bombings of Hiroshima and Nagasaki On August 6, 1945, the Enola Gay flew over Hiroshima and dropped the first ever atomic bomb to be used in war, and the second bomb came three days later in the Bock's Car, destroying Nagasaki. The bombings of Japanese cities Hiroshima and Nagasaki caused varied reactions in America. Initially, the public was surprised at what had happened, and mixed emotions plagued their minds. Through details issued by the U.S. Government, including public statements and propaganda, most were convinced that the bombings were necessary, despite their worry about the future and sympathy for those who lost their homes, families, and lives in Japan. In the US, the initial responses were mixed. Many felt joy that the war was over, joy that loved ones fighting the war could come home, and joy that we had won. There was also a fear of the results of our actions, which at this point were unpredictable. Many couldn't overcome their concern for the massive amount of destruction we caused, resulting in nearly 140,000 deaths (PBS), and many Americans were sympathetic towards the Japanese, despite hostility toward their government and nation. ...read more.

We shall continue to use it until we completely destroy Japan's power to make war. Only a Japanese surrender will stop us (Long, Hiroshima: Harry Truman's Diary and Papers)." Truman also published an article claiming that he dropped the bomb to prevent an invasion of Japan that would have cost one million American lives. This was the biggest turning point for any doubt Americans had on the use of the bombs, since many Americans believed this reasoning to be true. They felt comforted by the statements that we had actually saved lives by taking lives. This can be best presented with the results of a survey taken by the American public shortly after the war. The results showed that 53-55% of Americans agreed with the dropping of both bombs, on Hiroshima and Nagasaki. In fact, many individuals felt we should have been more aggressive, and 22.7% of those surveyed believed that we should have used more than two bombs. A very small percentage, only 4.5% of survey takers felt that we should not have dropped either of the bombs (Harris 36). ...read more.

Also, General Douglas MacArthur joined the ranks of those who disapproved. Norman Cousins, a consultant to MacArthur during occupation of Japan wrote about discussions with MacArthur, stating "MacArthur's views about the decision to drop the atomic bomb on Hiroshima and Nagasaki were starkly different from what the general public supposed... When I asked General MacArthur about the decision to drop the bomb, I was surprised to learn he had not even been consulted. What, I asked, would his advice have been? He replied that he saw no military justification for the dropping of the bomb. The war might have ended weeks earlier, he said, if the United States had agreed, as it later did anyway, to the retention of the institution of the emperor." The bombs were a very sad time for the world and evoked many different emotions amongst Americans. Despite the opinions of some that the bombs were not needed, the US government was able to convince most of the people of their necessity. At this point, the world had not yet seen anything so capable of destruction as the atomic bomb. Nobody knew where this technology would head, and caused a great mix of emotions for all Americans. ...read more.