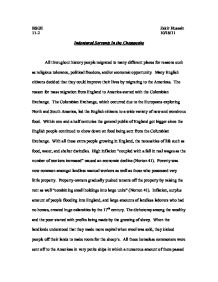 American Settlement. Was the situation for indentured servants in Chesapeake characterized more by change or continuity?

BSGE Zakir Hussain 11-2 10/18/11 Indentured Servants In the Chesapeake All throughout history people migrated to many different places for reasons such as religious tolerance, political freedom, and/or economic opportunity. Many English citizens decided that they could improve their lives by migrating to the Americas. The reason for mass migration from England to America started with the Colombian Exchange. The Colombian Exchange, which occurred due to the Europeans exploring North and South America, led the English citizens to a wide variety of new and wondrous food. Within one and a half centuries the general public of England got bigger since the English people continued to chow down on food being sent from the Columbian Exchange. With all these extra people growing in England, the necessities of life such as food, water, and shelter dwindles. High inflation "coupled with a fall in real wages as the number of workers increased" caused an economic decline (Norton 41). Poverty was now common amongst landless manual workers as well as those who possessed very little property. Property-owners gradually pushed tenants off the property by raising the rent as well "combining small holdings into large units" (Norton 41). ...read more.