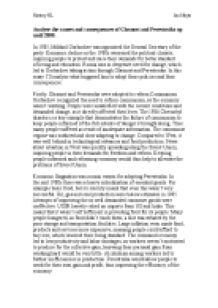 ﻿History HL Jan Mojto Analyse the causes and consequences of Glasnost and Perestroika up until 2000. In 1985, Mikhail Gorbachev was appointed the General Secretary of the party. Economic decline in the 1980s worsened the political climate, inspiring people to protest and raise their demands for better standard of living and education. Russia was in desperate need for change, which led to Gorbachev taking action through Glasnost and Perestroika. In this essay I?ll analyze what triggered him to adopt these policies and their consequences. Firstly, Glasnost and Perestroika were adopted to reform Communism. Gorbachev recognized the need to reform communism, as the economy wasn?t working. People were unsatisfied with the current conditions and demanded change, as it directly affected their lives. The 1986 Chernobyl disaster is a key example that demonstrates the failure of communism to keep people informed of the full extents of danger it brought along. Thus many people suffered as result of inadequate information. The communist regime was outdated and slow adapting to change. Compared to West, it was well behind in technological advances and food production. News about situation in West was quickly spreading along the Soviet Union, inspiring people in their demands for freedom and reform. Keeping people informed and reforming economy would thus help to alleviate the problems of Soviet Union. Economic Stagnation was a main reason for adopting Perestroika. ...read more.

Spending on nuclear weapons also battered the budget of Soviet Union. Instead, the money could have been used for the benefit of people?? more consumer good or improved living conditions. Military spending was an enormous drain on the Soviet Economy and there needed new set of reforms through Perestroika that would make the use of finances for military more efficient. Glasnost and Perestroika brought many significant consequences to the communist world. Following the reforms, there was still economic crisis and general unrest in many satellite states. Strikes among member countries increased. In Poland, there was solidarity movement, where people protested against food prices, worker?s conditions and the poor economic climate. Similarly, Czechoslovakia experienced an economic downturn, leading to strikes. The turning point in Czechoslovakia was the Velvet Revolution in 1989, which further encouraged people to take part in active protest against Communism. Glasnot called for more openness and freedom of speech. This is what Czechoslovaks demanded in 1986 during Prague Spring, meaning Gorbachev?s policies renewed their previous demands. Reforms adopted by Gorbachev evoked similar demands for change in Czechoslovakia. Food prices went up by 48 percent in Poland. Stagnation led to huge deficits, especially for countries that borrowed during 1977. Satellite states found themselves in a need of economical reform and more openness. Demands for democracy intensified. This could been seen in Czechoslovakia, Poland and Germany. ...read more.

The election of Archbishop of Cracow, as Pope John Paul further increased its nationalistic feelings. In Czechoslovakia, the Vons movement outlined the unjustly imprisonment and unjust prosecution. Calls for Germany to be reunified intensified, especially after Gorbachev visited Germany. Western media gave full cover of his policies, so especially East Germany demanded reform. There were demonstrations in Lepizig and Dresden. Fall of Berlin wall symbolized independence for Germany. In 1990 Gorbachev visited Lithania, where he was received with calls for independence, a similar response of the Muslim Soviet Republic of Azerbaijan. Soviet Union was falling apart, brick by brick; meaning its breakdown was bound to occur sooner or later. In January 1992, there was a collapse of Soviet Union. Gorbachev?s policies didn?t go the way he intended them to. Two years following Perestroika, the economy couldn?t be modernized in accordance to people?s expectations. Nationalistic movements in satellite states strongly demanded independence form Soviet Union, to the point it started to disintegrate. In July 1990, Ukraine declared its independence, shortly followed by other countries. Commonwealth of Independent States were formed. It was obvious Communism came to its end, with official end being announced on 31 December 1991. All in all, I was able to identify four causes for Glasnot and Perestroika with five consequences. I personally believe that the main cause was the competitiveness with the West and the fact that capitalism worked better in practice. Combined with poor conditions in Soviet Union and inefficient run, opposition from different countries was bound to bring it to collapse. ...read more.