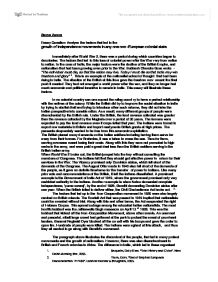 Analyse the factors that led to the growth of independence movements in any one non-European colonial state.

Sanya Aurora Essay Question: Analyse the factors that led to the growth of independence movements in any one non-European colonial state. Immediately after World War 2, there was a period during which countries began to decolonise. The factors that led to this loss of colonial power after the War vary from nation to nation. In the case of India, the major factors were the decline of the British Empire, and nationalism that had been growing even prior to the War. Subhash Chandra Bose wrote-"The individual must die, so that the nation may live. Today I must die so that India may win freedom and glory" 1.. This is an example of the nationalist school of thought that had been rising in India. The situation of the British at this time gave the freedom movement the final push it needed They had not emerged a world power after the war, and they no longer had much economic and political incentive to remain in India. This essay will illustrate these factors. In no colonial country can one expect the ruling country to have a perfect relationship with the natives of the colony. While the British did try to improve the social situation in India by trying to abolish Sati and trying to introduce other such reforms, they did not take the Indian perspective into consideration. ...read more.

The rise of the middle class is a very important factor when considering the growth of nationalism. These leaders were lawyers, doctors, teachers etc. who had a western education and understood the policies of the British and could become leaders for the masses. They recognized and tried to come with solutions to the economic problems in India. It was through this understanding that the boycott campaign against foreign goods was started, which made the country more self-sufficient and again spread nationalist thought in the nation. Leaders like Bal Gangadhar Tilak recognised that the involvement of the masses was essential to the freedom movement. In 1906 he revived the Ganapati celebrations. Earlier the worship of the deity took place in people's homes as a private affair, but as religious congregations were permitted by the British, the festival was made public, and became a forum for political discussion. The leaders also revived India's glorious past, to inspire the people. Pamphlets were printed out to inform people about the situation in India. All the movements required a lot of communication, across the vast country of India. If it had been Africa, this communication would have been scarce, except for along the coastlines. The British had invested in Indian infrastructure. ...read more.

They had lost manpower during the war, and the British soldiers no longer wanted to serve away from their homes. They had fought for 6 years and did not want to serve in India, suppressing the Indian freedom struggle. With all the protest movements in India and the problems they were facing in Europe, it was no longer a political or economic advantage to have India as a colony. The factors that led to the growth of independence movements lie in a delicate balance. If the Indians hadn't had concrete reasons for wanting to British to leave India there would not have been as many anti-colonial movements, and in turn there wouldn't have been as much nationalist thought. If the British had not invested in India the independence movement would not have been as developed as it was. The work of the nationalist leaders set the scene for decolonisation. The decline of the British Empire came about when the nationalist movement was at its fever pitch. Had the situation been different, perhaps India would have achieved decolonisation years after 1947. We cannot say which factor is the most important, because without one the other may not have been relevant at all. However, the above points do provide quite a comprehensive view of the factors that affected the growth of independence movements in India. ...read more.